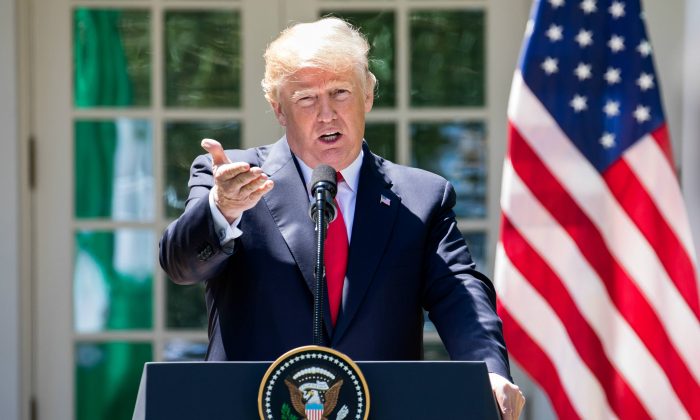 President Donald Trump hosts a joint press conference with President Muhammadu Buhari (not pictured) of the Federal Republic of Nigeria in the Rose Garden of the White House in Washington on April 30, 2018. (Samira Bouaou/The Epoch Times)
Trump Administration

President Donald Trump described Tuesday’s leak of questions from the special counsel probe as “disgraceful” and slammed the ongoing investigation by Robert Mueller as a “witch hunt” based on a “made up, phony crime.”

The New York Times published a set of questions meant for Trump reportedly from the office of the special counsel. The newspaper did not cite its sources. The leak is the latest in a series of disclosures from Mueller probe, a deviation from the customary practice of withholding the details of ongoing investigations.

“So disgraceful that the questions concerning the Russian Witch Hunt were ‘leaked’ to the media,” Trump wrote on Twitter. “No questions on Collusion. Oh, I see…you have a made up, phony crime, Collusion, that never existed, and an investigation begun with illegally leaked classified information. Nice!”

So disgraceful that the questions concerning the Russian Witch Hunt were “leaked” to the media. No questions on Collusion. Oh, I see…you have a made up, phony crime, Collusion, that never existed, and an investigation begun with illegally leaked classified information. Nice!

“It would seem very hard to obstruct justice for a crime that never happened! Witch Hunt!” Trump added.

Special Counsel Mueller has been investigating allegations of collusion between the Trump campaign and Russia for nearly a year. Mueller’s appointment was prompted by memos leaked by former FBI Director James Comey. Comey has been referred for criminal investigation because the memos contained classified information.

Several leaks from Mueller’s probe became the subject of newspaper articles days before officials announcements, prompting some observers to ask if “Mueller is playing politics with his prosecution.”

“In the only conversation I’ve had with Robert Mueller, I stressed to him the importance of cutting out the leaks,” Gowdy, chairman of the House Committee on Oversight and Government Reform, told Fox News. “It’s kind of ironic that the people charged with investigating the law and the violations of the law would violate the law.”

A yearlong Russia probe by the House Intelligence Committee concluded that neither Trump nor anyone in his campaign colluded with Russia, according to a final report released last week. The report did find that leaks from the intelligence community after Trump’s inauguration “damaged national security and potentially endangered lives.”

At the core of the collusion allegations is the so-called Steele dossier, a compilation of opposition research on Trump funded by the Clinton campaign and the Democratic National Committee. In addition to its biased origins, the claims within the dossier remain unverified despite intense scrutiny by the media, three separate government investigations, and a private probe funded by far-left billionaire George Soros and a secret group of Silicon Valley moguls.

Trump’s lawyers have been negotiating the details of a potential interview between the president and Mueller. The newest member of Trump’s legal team, former New York City mayor Rudy Giuliani, signaled that he intends to end Mueller’s probe in a matter of weeks.