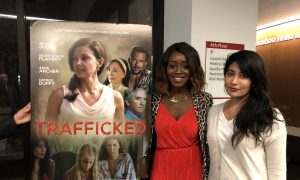 The bill, S. 1862, was first passed in 2000 and covers a range of human trafficking issues, such as prosecution for trafficking, and restitution and temporary visas for victims.

It also establishes the Office to Monitor and Combat Trafficking in Persons within the State Department. The office is charged with compiling a report that ranks countries based on how well they’ve done at eliminating human trafficking.

The newly signed version of the act includes tighter criteria for determining whether countries are meeting the minimum standards for eliminating human trafficking, and what the United States will do if a country falls below that threshold.

The bill also puts pressure on the executive directors of multilateral development banks to incorporate anti-trafficking measures into project development and evaluation criteria.

According to the Justice Department’s definition, human trafficking involves exploiting a person for labor, services, or commercial sex.

In December 2018, he signed the Trafficking Victims Protection Act that deals with prosecuting human traffickers, extending grants to victims, and requires several departments to submit reports to Congress on human trafficking cases, among other things.

Also in December, he signed the Abolish Human Trafficking Act that allocates funding for victims and victim services, and funding for studies on the physical and psychological effects on victims.

Trump took the occasion of the signing to make the case for better border security. Open portions of the southwestern border provide routes for human traffickers to smuggle people between Mexico and the United States, he said.

“We cannot defeat the menace of international human trafficking if we do not secure our border,” he said. “They’re driving in, and they’re not going through checkpoints, because you can’t have four or five people sitting in the back of a car with tape over your mouth and your hands tied, and go through somebody that’s checking out your car or your van.”

Trump has been in a stalemate with congressional Democrats over funding for a border wall in the budget of the Department of Homeland Security (DHS).

On Jan. 8, the White House increased its requested amount from $5.6 billion to $5.7 billion for a border barrier, and asked for an additional $3.5 billion for things such as immigration judges, more ICE and Customs and Border Protection officers, and more beds for those detained at the border.

Chris Coons (D-Del.), who attended the signing ceremony, told reporters afterward that he wasn’t in favor of a border wall, but that “Democrats have advocated for more and better technology,” when asked if they would be willing to fund those other requests for DHS’s budget.