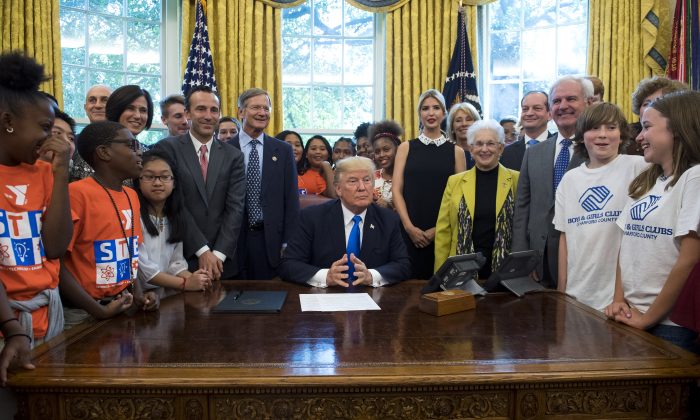 President Donald Trump speaks alongside students, members of congress, and his Administration before signing a memorandum to expand access to STEM education in the Oval Office at the White House on Sep. 25, 2017. (Kevin Dietsch-Pool/Getty Images)
Politics

President Donald Trump signed a memorandum on Monday that will boost education in STEM (science, technology, engineering, and mathematics) subjects.

“The workplace is changing. We need to create new pathways for all our citizens to get the best jobs,” Trump said at an event in the Oval Office, where he was joined by students.

The memorandum directs the Department of Education to increase the availability in STEM education for K-12 and post-secondary students by increasing the number of highly qualified STEM teachers. It also establishes a goal of $200 million in spending each year to achieve the improvement in STEM education.

According to Code.org, 40 percent of schools currently do not teach computer science, even though 90 percent of parents want their children to study it. According to the nonprofit, there are currently 500,000 computing job openings, and the job category is expected to increase at twice the rate of other jobs.

According to the presidential memorandum, minorities and students in rural communities are more disadvantaged, with nationwide only 34 percent of African American students and 30 percent of rural high school students having access to computer science classes.

In his remarks, Trump said that out of the STEM subjects, computer science is especially important now.

“Greater access to STEM and computer science programs will ensure that our children can develop the skills they need to compete and to win in the workforce of tomorrow,” he said.

Education Secretary Betsy DeVos said that the initiative will give students more opportunities to pursue what they are interested in, and give them better opportunities for their futures.

Ivanka Trump, the president’s daughter and adviser, has been overseeing the White House’s efforts for workforce development.

A survey of 18,000 employers around the world in 43 countries conducted earlier this year shows that 1 in 5 employers expects technological disruption to increase jobs. According to the ManpowerGroup, the new technologies require increasingly specialized skills for employees.

“The U.S. university system is not currently pumping out enough qualified science, technology, engineering, and math degree students. Our economy needs these talents,” said Charles Foster, chairman of Foster LLP, an immigration law firm headquartered in Houston, in an interview with The Epoch Times in April.

Chairman and CEO of General Motors, Mary Barra, said in a statement that she supports “the president’s decision to direct the Department of Education to prioritize high-quality STEM and computer science.”

“This is a great step in ensuring we are giving our kids the skills necessary for new technology jobs,” she said.

“Our country is facing a challenge that it hasn’t had to address in two generations: reworking the education system to keep pace with advancing technology,” said Microsoft President Brad Smith, in a statement.

“In the 1950s, the race to space drove schools to start teaching physics. Today, it’s all about computer science,” said Smith.