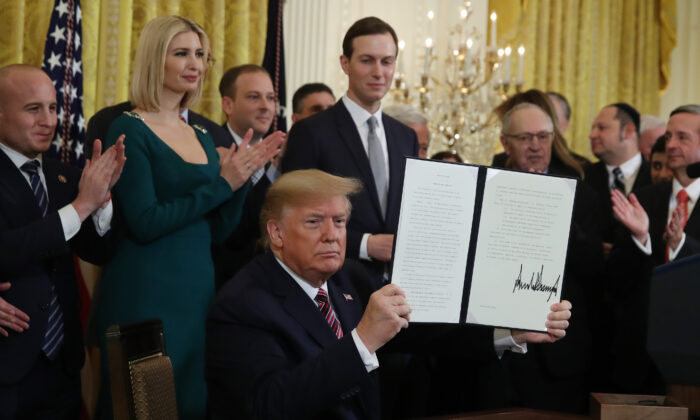 U.S. President Donald Trump signed an executive order to combat anti-Semitism during a Hanukkah Reception in the East Room of the White House on Dec. 11, 2019 in Washington, DC. (Mark Wilson/Getty Images)
Trump Administration

President Donald Trump has signed an executive order to include discrimination against Jews as a violation of law in certain cases amid a crackdown on rising anti-Semitism in the United States.

The order, published by the White House on Wednesday, aims to combat anti-Semitism in colleges and universities by threatening to cut off or withhold federal funding to educational institutions who fail to act against discrimination.

During his speech at a Hanukkah reception, where he unveiled the order, Trump told reporters he was “very proud that the Jewish faith is a cherished part of our family.”

“With one heart, America weeps for the lives lost. With one voice, we vow to crush the monstrous evil of anti-Semitism whenever and wherever it appears. And we’re working very hard on that,” he added.

Trump begins the order by highlighting his Administration’s commitment to tackling the “rise of anti-Semitism and anti-Semitic incidents in the United States and around the world.”

“Anti-Semitic incidents have increased since 2013, and students, in particular, continue to face anti-Semitic harassment in schools and on university and college campuses,” he writes.

He then references Title VI of the Civil Rights Act of 1964, which “prohibits discrimination on the basis of race, color, and national origin in programs and activities receiving Federal financial assistance,” as protecting from anti-Semitism.

“While Title VI does not cover discrimination based on religion, individuals who face discrimination on the basis of race, color, or national origin do not lose protection under Title VI for also being a member of a group that shares common religious practices.

“Discrimination against Jews may give rise to a Title VI violation when the discrimination is based on an individual’s race, color, or national origin.”

As Trump’s senior advisor and grandson of Holocaust survivors Jared Kushner explained in an op-ed to the New York Times: “The executive order does not define Jews as a nationality. It merely says that to the extent that Jews are discriminated against for ethnic, racial, or national characteristics, they are entitled to protection by the anti-discrimination law.”

The president instructs federal officials to consider a definition of anti-Semitism put together by the International Holocaust Remembrance Agency (IHRA) when considering if a specific incident of anti-Semitism has violated Title VI.

According to the IHRA, anti-Semitism is “a certain perception of Jews, which may be expressed as hatred toward Jews. Rhetorical and physical manifestations of anti-Semitism are directed toward Jewish or non-Jewish individuals and/or their property, and Jewish community institutions and religious facilities.”

Some rights groups have previously criticized the IHRA’s definition as being overly broad. It also states that manifestations of anti-Semitism “might include the targeting of the state of Israel, conceived as a Jewish collectivity.”

However, it adds that “criticism of Israel similar to that leveled against any other country cannot be regarded as anti-Semitic.”

Trump’s order comes as the pro-Palestinian Boycott, Divestment, and Sanctions (BDS) movement has gained significant popularity in recent years across many universities and college campuses.

With the movement gaining steady traction, anti-Semitic hate crimes on campuses have also seen a surge, according to the AMCHA Initiative, a non-profit organization dedicated to investigating and combating anti-Semitism at institutions of higher education in America.

The initiative reported over 2,500 acts of anti-Semitism on college campuses since 2015, with incidences ranging from swastikas posted on Jewish students’ doors to graffiti calling the Holocaust a hoax.