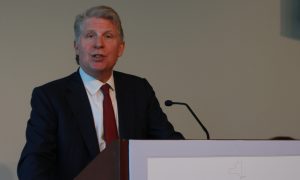 The bill gives judges more discretion when sentencing drug and lower-level offenders while also reducing the recidivism risks of prisoners by expanding on programs such as job training. It passed the House of Representatives a day ago by a landslide vote of 358 to 36.

Earlier the Senate had pushed the bill—that only affects federal prisoners—through with a similar show of support by 87–12. Trump and his son-in-law Jared Kushner have both lobbied for the measure.

Co-sponsored by more than a third of the Senate, the act received evenly balanced support among both Democrats and Republicans. It aims to make the federal criminal justice system fairer, reduce overcrowding, and save taxpayer dollars. Certain mandatory minimum sentences were also adjusted.

At the signing event, Trump thanked ranking members from both sides of the aisle and commended the bipartisan efforts. At one point he invited his son-in-law to make remarks, adding that “Jared has worked so hard on this.”

Kushner, who spoke for several minutes said that in addition to the many people in the room, “This really took an army of a lot of other people.” He also spoke about the people drawn to the issue by the “pain of the past.”

“We were their lobbyists,” Kushner said while describing the people unable to fight for themselves.

Ivanka Trump said that now that the bill has been signed, she might see Jared more often. “Maybe I’ll get a little bit more time with him now.”

Under the bill, maximum penalties are maintained for violent felons and drug kingpins. But mandatory minimum penalties are reduced for others. Prisoners can earn time credits toward their release to halfway houses or home confinement.

“I know that by breaking the cycle of recidivism, by opening the doorway to more opportunities toward not just education but character education and faith-based programs,” Vice President Mike Pence told reporters. “We are going to see more families intact again, more people that are gonna choose a better pathway when they come out of prison.”

The act, that took years in the making, represents an easing of tough, law-and-order minimal sentencing requirements imposed on judges that stemmed from a 1980s drive to clamp down on an epidemic of crack cocaine and other illegal drug use in the United States. It comes after efforts from liberal and conservative advocacy groups as well as civil right advocates.

Before the signing of the bill, Trump told reporters that he wanted to touch upon border security as he discussed the House vote last night. The House had approved a government spending bill that included $5.7 billion in funding for a new border wall.

“We’ve had a very busy two or three days. It’s been very positive. Things are happening that haven’t happened in our government for a long time,” Trump said. “It was a tremendous evening for the Republicans,” he said, talking about the “level of spirit” and happiness.

Trump thanked House Republicans for what they did before mentioning the potential government shutdown.