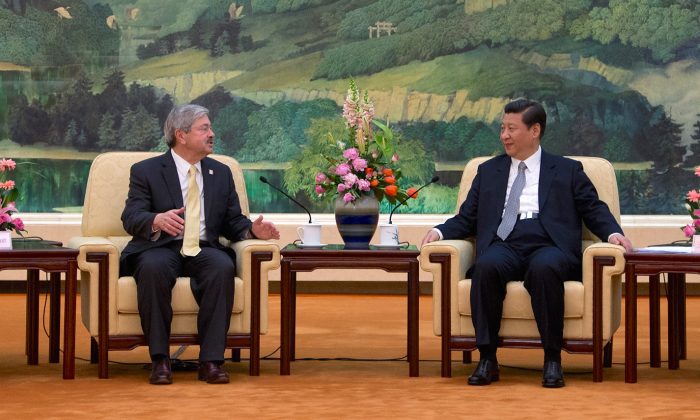 NEW YORK—When Terry Branstad first met Xi Jinping in 1985, Branstad was governor of Iowa and Xi was an agricultural official in northern China. For two weeks, Xi stayed with a family in the town of Muscatine, an experience he fondly recalled when visiting Iowa and Gov. Branstad in 2012 as vice chairman of the Chinese regime.

Xi, now leader of China, will soon get to host Branstad in Beijing.

President-elect Donald Trump picked Branstad, 70, for the post of U.S. ambassador to China. The appointment of Branstad, a six-term governor who has maintained a cordial 30-year relationship with Xi, could prove pivotal for both the Trump and Xi administrations in the coming months.

Branstad and his wife Chris met Trump and his top advisers at Trump Tower in New York on the afternoon of Dec. 6.

“I’m really excited about the quality of people that he’s attracting to the Cabinet,” Branstad told reporters after an hour in Trump’s office. “I’m very proud to have supported Donald Trump for president.”

Branstad is an “old friend of the Chinese people,” Lu said. The feeling might be mutual: Branstad has led four trade missions to China in the past six years and maintains good relations with Xi, whom he called a “long-time friend” when Xi visited Iowa in February 2012.

Branstad is also a friend of Trump. He worked very actively on Trump’s behalf in the general election, and his son, Eric Branstad, managed Trump’s campaign in the state. Trump carried the state with 51 percent of the vote, versus 42 percent for Hillary Clinton.

Trump’s selection of Branstad for the most important diplomatic position to China suggests that the president-elect is keen to keep negotiating channels open with Beijing, rather than adopt a wholly confrontational attitude as might be interpreted from his social media posts, his proposed trade policies, and his accepting a phone call from Taiwan president Tsai Ing-wen.

Trump has accused the Chinese regime of currency manipulation via Twitter and stated in a policy paper that he has “zero tolerance” for the Chinese regime’s cybertheft of U.S. commercial secrets. During the election, Trump said he plans to impose tariffs on Chinese goods coming into the United States. Trump’s recent congratulatory telephone call from Tsai was a sensitive matter because Washington broke off diplomatic ties with Taiwan and instead acknowledged the People’s Republic of China in 1979.

Branstad could also help the Trump administration negotiate bilateral trade ties with China since it is a matter he is familiar with—in 2015, Iowa exported $2.3 billion in goods to China, according to the U.S.-China Business Council.

A Moment of Change

Branstad’s appointment comes at a moment of possibly significant change in China.

Since taking power in 2012, Xi has been pushing a political transition in the Chinese regime. For 13 years (1989–2002), Jiang Zemin was the leader of the Chinese Communist Party, and then for another 10 years he was the de facto ruler of China. Jiang was able to influence matters of the day through his allies in the Politburo Standing Committee, the regime’s most powerful decision-making body, and through his sprawling political faction.

Over the past four years, Xi has used an anti-corruption campaign to clear out Jiang’s faction and supporters. Many Chinese officials backed Jiang because he turned a blind eye to malfeasance and promised them wealth and high office if they participated in the persecution of Falun Gong. Between 70 and 100 million Chinese had taken up the spiritual practice before Jiang began a campaign on July 20, 1999, to eradicate it.

Xi now appears to have the upper hand over the old guard of Jiang supporters, as indicated by Xi taking on the title of Communist Party “core” leader in October. In other words, Trump is dealing directly with a Chinese leader with actual influence, not a puppet of Jiang like Xi’s immediate predecessor Hu Jintao.

The Trump administration could also recognize how Xi is seeking to replace Jiang’s corruption and kleptocracy.

Xi frequently emphasizes the need for a disciplined, restrained officialdom and is also becoming more vocal in promoting the virtues of traditional Chinese culture.

In late 2013, Xi abolished the labor camp system, which held hundreds of thousands of Falun Gong practitioners at any one time. This year, the Xi leadership made public gestures that suggest he is considering ending the persecution of Falun Gong, one of the worst abuses in modern Chinese history.

Chinese scholars also have been discussing recently the democratization of Russia under Mikhail Gorbachev and are studying the way authoritarian democracies function. It seems unlikely that Xi would delegate research of alternative systems of governance if he wasn’t at least considering his options.