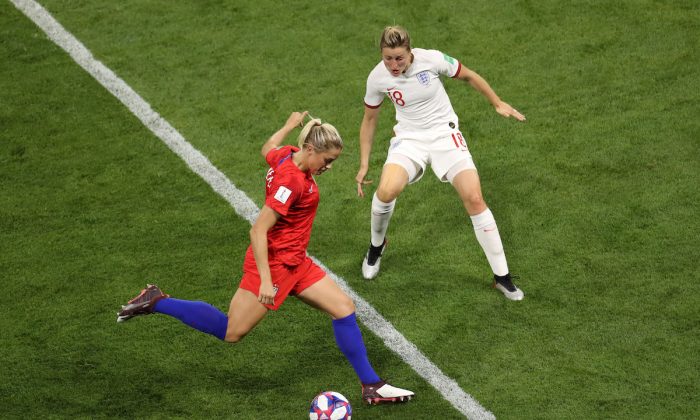 Abby Dahlkemper of the USA is challenged by Ellen White of England during the 2019 FIFA Women's World Cup France Semi Final match between England and USA at Stade de Lyon on July 02, 2019 in Lyon, France. (Maja Hitij/Getty Images)
Soccer

President Donald Trump said that he’s sending a contingent to the final match of the 2019 Women’s World Cup.

The United States beat England 2-1 on July 2 to advance to the final, which is slated to be played in Lyon, France, on July 7.

The opponent will be either Sweden or the Netherlands.

Trump said in an announcement on July 3 that the delegation will be led by Karen Dunn Kelley, deputy secretary of the Department of Commerce.

The delegation will include the following members:

I am honored to be chosen by @POTUS Trump as a Member of the Presidential Delegation to France to attend the Final Match of the #FIFAWWC in Lyon to support the strong & incredibly talented women of @ussoccer! https://t.co/t7HTfD6ATo

As a 10-year soccer mom to my daughter, I especially look forward to representing both our great nation and supporting the women’s @ussoccer team! Go ????????⚽!

Verma said in a statement on Twitter that she was honored to be part of the delegation.

“I am honored to be chosen by President Trump as a Member of the Presidential Delegation to France to attend the Final Match of the #FIFAWWC in Lyon to support the strong & incredibly talented women of @ussoccer!” she wrote.

“As a 10-year soccer mom to my daughter, I especially look forward to representing both our great nation and supporting the women’s @ussoccer team! Go Team USA!” she added.

McCourt said in a post on Twitter after the American’s win that “we’re all behind you Team USA.”

“Congratulations to the team for this incredible journey that takes you to the final game of the FIFA World Cup,” she said.

Verma had been the only one to publicly react to being part of the delegation as of 11 a.m. EDT.

Rapinoe Hopes to be Ready for Final

It didn’t stop her from pouring off the bench with the other substitutes to congratulate their teammates, and Rapinoe is confident it won’t rule her out of Sunday’s final against either the Netherlands or Sweden.

Rapinoe was injured late in the second half of the 2-1 win against France last Friday.

“It just tightened up a little bit toward the end. Just wasn’t going to be ready for today,” Rapinoe told reporters after the victory against England moved the U.S. closer to a fourth World Cup title. “But it’s feeling much better and I expect to be ready for the final.”

When asked how confident she was, she replied: “It’s a combination of how it feels and how it looks and what I can do. I expect (with) how it feels now to be ready. As is with these things, you just have to go day by day and see how it is.”

Rapinoe watched nervously from the bench as England had an apparent equalizer by its own star forward Ellen White ruled out for offside and, with just a few minutes remaining, watched goalkeeper Alyssa Naeher save a penalty kick by England.

There was widespread elation at the end, but for Rapinoe it was torture to watch.

“It’s terrible. It’s so stressful,” she said, breaking out into a smile of relief. “It’s hard. You put everything into this game … You have everything invested in it and no way to get rid of your anxiety.”

At the final whistle, she jumped into the arms of her teammates, embracing them one by one.

When she finally reached goalkeeper Naeher, she bear-hugged her first and then lifted her off her feet.

Rapinoe joked that she could have injured her glutes in the process, and then praised her ice-cool teammate.

“That was a huge performance from her, to be in that moment,” Rapinoe said. “It’s one thing to take a penalty, it’s another to save one and keep your cool. To make a save like that is just fantastic for her.”