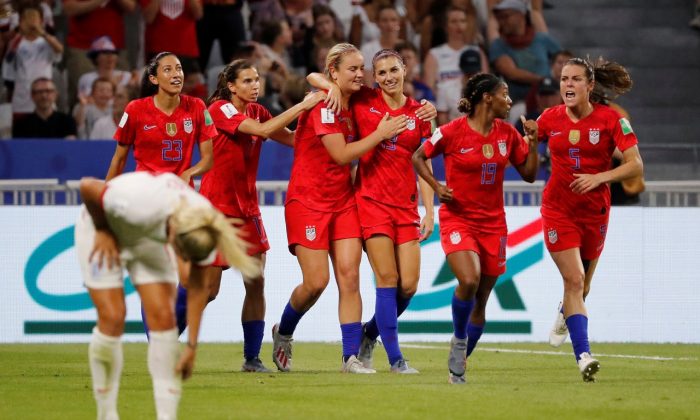 US Reach World Cup Final With Dramatic Win Over England

LYON, France—Defending champions United States reached the women’s World Cup final for the fifth time after an incident-packed 2-1 win over England, who missed a late penalty, on July 2.

In a tournament that has earned unprecedented attention, the much-anticipated game certainly delivered with an abundance of excitement and relentless effort, topped by moments of wonderful skill.

It was business as usual for the three-times World Cup winners but for England there was agony as skipper Steph Houghton missed an 84th-minute penalty that could have pushed the game into extra time.

After a powerful start from the Americans, Christen Press, replacing the absent Megan Rapinoe, opened the scoring in the 10th minute with a fine header but the Lionesses fought back, leveling nine minutes later with Ellen White’s sixth goal of the tournament.

The United States restored their advantage in the 31st minute through Alex Morgan’s header from Lindsey Horan’s perfectly floated ball—a goal which Morgan, on her 30th birthday, celebrated with a mocking ‘sip of tea’ gesture.

England thought they had leveled in the 69th minute, through another excellent White finish, but the goal was ruled out for offside by VAR video review.

VAR did provide England with a lifeline though, a penalty awarded for a foul on White, but Houghton’s soft spot-kick was saved by Alyssa Naeher.

England had defender Millie Bright sent off for a second booking three minutes from the end.

The drama on a remarkable night began before the game when the team-sheets showed that Rapinoe, who had scored four goals in the last two games, had been left on the bench, most likely with an injury although the absence was not explained by U.S. team officials.

There was an unwelcome surprise for England too with goalkeeper Karen Bardsley missing out with a hamstring injury and Carly Telford drafted in.

As so often, the Americans were fast out of the traps and launched a wave of early attacks and high pressing which England’s defense struggled to cope with.

Telford was called into early action to parry a fierce shot from Rose Lavelle after the midfielder had slipped the ball through the legs of Bright and, luckily for the Lionesses, Morgan blasted the loose ball over the bar.

The early lead the defending champions had threatened came in the 10th minute when Kelley O’Hara whipped in a cross from the right and Press lost her marker Lucy Bronze and headed firmly past Telford.

With the U.S. fully exploiting the space they were given in midfield, England were in danger of letting the game slip out of their control but against the run of play they leveled in superb style.

Keira Walsh’s sweeping cross-field pass found Beth Mead on the left and her ball inside was met first time by White, who lifted a side-foot shot in off the far post.

The Lionesses were back in the game but they soon needed Telford again to keep out a fierce snap-shot from the excellent Lavelle.

But the quality of the Americans in the final third was displayed in perfect fashion when Press collected a ball from deep on the left flank and fed Horan, whose delightful lofted pass was met by Morgan with a pinpoint header that flashed past Telford.

Walsh forced Naeher into a full-stretch save with a powerful strike from 20 meters out but England needed the tactical adjustments that coach Phil Neville made at the break.

The improved approach looked to have paid dividends when Jill Scott’s defense-splitting through ball was slotted home by White but to the agony of the Lionesses the VAR signal was made and the review showed the England striker offside by the tightest of margins.

The next time the signal was made for review, it was after White went down in the area under challenge from Becky Sauerbrunn and after some delay the Brazilian referee pointed to the spot.

But Houghton, so dependable in so many ways for England, let the nerves get to her and a soft kick was easily saved by Naeher.

It was the killer blow for England and a major let-off for the Americans. When Bright was dismissed any chance of a late upset went with her.