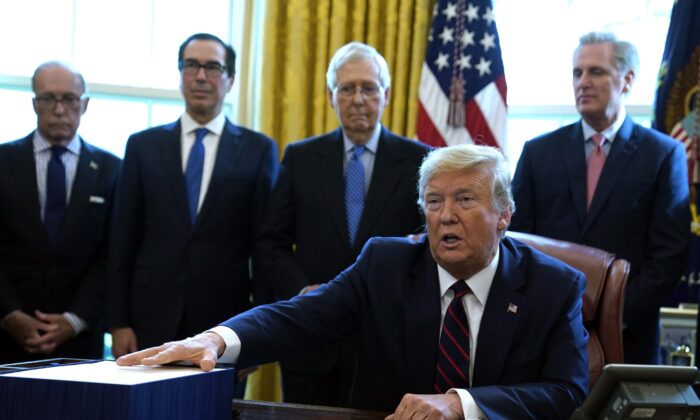 Trump: Senate Would Be 60 Democrats Versus 40 Republicans If Not for Him

Former President Donald Trump said Democrats would have had a 60-seat majority in the Senate if it wasn’t for him and blamed Senate Minority Leader Mitch McConnell (R-Ky.) for why the Republicans lost control of the chamber in the 2020 elections.

Trump made the claim on June 12 during an event in Wisconsin, in which he appeared on a video with MyPillow CEO Mike Lindell.

“If it wasn’t for me, right now the Senate would be 60–40 against,” Trump said. “Because I made teleconference calls—they call them town hall calls—speaking to tens of thousands of people, for congressional candidates and senators.”

With the latest comments, it appears that the relationship between McConnell and Trump is still frayed, coming after McConnell sharply criticized the former commander-in-chief in a Wall Street Journal opinion article for his remarks after the Nov. 3 election. McConnell, who didn’t vote to convict Trump in his second impeachment trial, suggested that it was Trump and his comments that caused Republicans to lose two runoff elections in Georgia in early January.

“There’s no question that President Trump is practically and morally responsible for provoking the events of the day,” McConnell said during Senate floor remarks in February, referring to the Jan. 6 Capitol breach. “The people who stormed this building believed they were acting on the wishes and instructions of their president.”

Trump has denied that his words triggered the breach. During a rally on Jan. 6, the president called on demonstrators to act in a peaceful manner.

Also in February, Trump asserted that with McConnell at the helm of the Senate GOP caucus, Republicans won’t have much success in the upper chamber.

“He will never do what needs to be done, or what is right for our Country,” Trump said of McConnell at the time. “Where necessary and appropriate, I will back primary rivals who espouse Making America Great Again and our policy of America First. We want brilliant, strong, thoughtful, and compassionate leadership.”

The former president then noted that in December, he proposed that Americans receive $2,000 stimulus checks, which was supported by Democrats, but not McConnell.