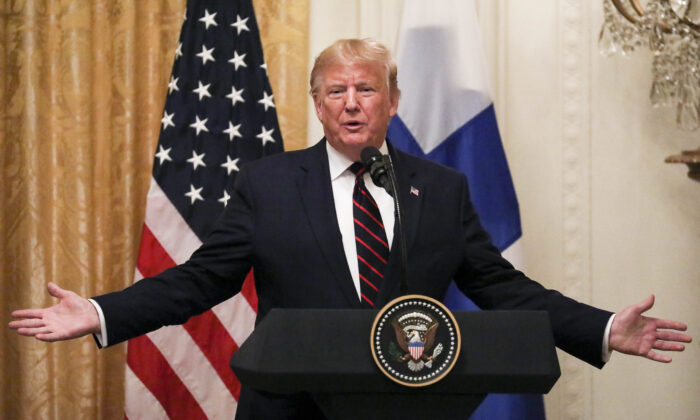 President Donald Trump at a press conference in the East Room of the White House in Washington, D.C. on Oct. 2, 2019. (Charlotte Cuthbertson/The Epoch Times)
US-China Relations

WASHINGTON—U.S. President Donald Trump said on Oct. 4 that his administration has a “very good chance” of making a trade deal with China, and insisted there were no links between China talks and his desire for Beijing to investigate Democratic presidential candidate Joe Biden.

Trump, speaking to reporters before departing the White House, said negotiations to end the U.S. trade war with China were separate from any investigation into Biden, whom Trump has accused of foreign corruption.

“One thing has nothing to do with the other,” the Republican president said when asked whether he would be more likely to make a deal with China if it investigated Biden. “I want to do a trade deal with China, but only if it’s good for our country.”

The talks will be preceded on Monday and Tuesday by deputy-level discussions, White House economic adviser Larry Kudlow said earlier.

Trump has waged a two-year effort to change China’s trade, intellectual property and industrial policy practices, which he has long said are unfair and have cost millions of U.S. jobs.

In a trade war that has lasted 15 months, the United States and China have heaped hundreds of billions of dollars in tariffs

“I view China as somebody we’re trying to make a deal with, we have a very good chance of making a deal with,” Trump said. Right now, we’re in a very important stage in terms of possibly making a deal. If we make it, it will be the biggest trade deal ever made.”

On Thursday Trump publicly urged Beijing to investigate Biden, a Democrat, again raising concerns that he has invited foreign interference in the U.S. presidential election. Last week Trump released a transcript of a call where he asked Ukraine’s president to also look into Biden, a request that has triggered an impeachment inquiry by House of Representatives Democrats.

Kudlow, in television interviews, held out hope for progress in opening China’s financial services markets to American companies in next week’s talks, adding the U.S. team was heading into them “open-minded.”

“Everything’s on the table, we’d love to go back to where we were in May when we were a lot closer,” Kudlow told Bloomberg TV.

The Trump trade team hoped to revisit a mostly agreed text from which China had backtracked in May, causing talks to break down, he said.

The text at that time included an agreement negotiated by Mnuchin that involved the lifting of foreign ownership caps on financial services firms in China.

“I’m not giving you news. I’m just saying we had some pretty good things last spring, like financial services opening—that could be extended,” Kudlow said in a subsequent interview on Fox Business Network. “I say ‘could’ and the president would have to sign off on it, but don’t rule out the possibility of good news.”

Kudlow declined to make any predictions about the talks but said there had been a “softening of the psychology on both sides” over the past month, with the United States delaying some tariff increases and China making some modest purchases of American farm products.

Kudlow also said the impeachment inquiry was unlikely to affect the trade talks with China.

“I don’t think that’s an impact right now. I think maybe it has only the tiniest, tiniest effect, maybe occasionally on stock market psychology,” Kudlow said.

However, he said the Trump administration continued to monitor freedom and democracy protests, which he said could have an impact on the talks, without specifying how. China-backed Hong Kong authorities have struggled to curb pro-democracy protests that have continued for four months.

By David Lawder and Lisa Lambert