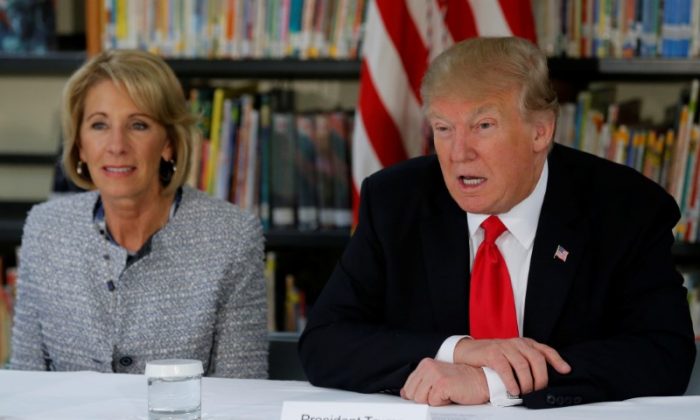 DeVos has 300 days “to review and, if necessary, modify and repeal regulations and guidance issued by the Department of Education with a clear mandate to identify places where D.C. has overstepped its legal authority,” said Rob Goad, a Department of Education official, according to a transcript of a White House call with reporters.

The second most powerful Republican in the House of Representatives, California’s Kevin McCarthy, said the federal government had in recent years exceeded its legal authority in creating regulations and guidance

“Different people in different states and communities will have different goals and ways of achieving those goals. That is something we should celebrate and enable, not try to stop,” he said in a statement.

The Democratic National Committee, though, said the order was politically motivated, with Trump wanting something to show in school policy in his first 100 days.

The head of the American Federation of Teachers union, Randi Weingarten, said the current education law, Every Student Succeeds Act, already reduces federal power over schools, especially when it comes to standards and teacher assessments.

“What the new law doesn’t do is abandon the requirement for the federal government to protect the civil rights of our students, even if those rights run counter to what states and districts want to do,” she said in a statement.