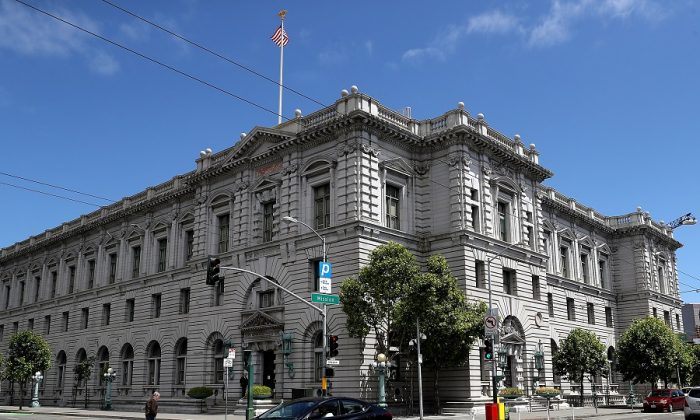 Frustrated by Congress’s failure to break up the overworked, often-overruled U.S. Court of Appeals for the Ninth Circuit, President Donald Trump is attempting to dilute what he considers to be the liberal bias of the San Francisco-based 29-seat circuit court by nominating three new conservative judges.

The three nominees are California-based litigators Daniel Collins and Kenneth Lee, along with Assistant U.S. Attorney Patrick Bumatay, all of whom worked for Republican administrations and are reportedly members of the Federalist Society, a conservative-constitutionalist group.

None of the three were approved by their home-state senators, Democrats Dianne Feinstein and Kamala Harris, as part of the so-called blue-slip process. While the White House had been involved in negotiations with the two lawmakers for some time, the talks broke down over the summer, the Sacramento Bee reported Oct. 11.

“Last night, the White House moved forward without consulting me, picking controversial candidates from its initial list and another individual with no judicial experience who had not previously been suggested,” Feinstein said.

Harris spokeswoman Lily Adams said, “Instead of working with our office to identify consensus nominees for the Ninth Circuit, the White House continues to try to pack the courts with partisan judges who will blindly support the president’s agenda, instead of acting as an independent check on this administration,”

Evolution of the Blue Slip

For a long time, as a courtesy, presidents have entered into discussions with senators in states where their judicial nominees reside. They have generally refrained from moving forward unless the senators returned a blue slip in support of the would-be judge.

But in today’s super-heated political environment, complete with full-on, in-your-face political campaigns on judicial nominees led by teams of lawyers and activists, the president and Senate Republicans have abandoned the custom, enraging Democrat lawmakers in California and anywhere else judicial nominations are pending.

The blue slip “seems quaint these days, a relic of a bygone era in which actual qualifications, not ideology, were the issue in Senate confirmation votes that, anyway, required a filibuster-proof 60 votes,” Thomas Lifson opined at American Thinker.

Curt Levey, president of the Committee for Justice, which advocates for constitutionally limited government, acknowledged in an interview with The Epoch Times that the “blue slip” has changed over the years.

Blue slips used to carry the weight of a veto over nominations in the past, depending on who chaired the Senate Judiciary Committee at the time, he said.

Current Senate Judiciary Committee Chairman Chuck Grassley’s (R-Iowa) position is that the lack of a positive blue slip won’t prevent a Circuit nominee from advancing, if the administration has consulted with the home-state senators, Levey explained.

“There should be some consultation with the home-state senators, but the president doesn’t have to listen to what they say,” he added.

The Circuit, which some critics call the “Ninth Circus” or the “Nutty Ninth,” previously struck down the Pledge of Allegiance because it contained the phrase “under God.” It has also found that citizens have no constitutional right to own guns.

Trump was especially incensed last year when judges in the Ninth Circuit ruled against Executive Order 13769, a temporary ban on the admission of aliens from the terrorism-prone nations of Iran, Iraq, Libya, Somalia, Sudan, Syria, and Yemen. The idea behind the short-term prohibition on visitors from those countries was to give the new administration an opportunity to formulate a policy to keep Americans safe from terrorism.

But judges in the Ninth Circuit and the Fourth Circuit Court of Appeals blocked enforcement of the order, citing statements Trump made on the campaign trail—itself a significant departure from judicial norms—that they claimed showed the president’s animus toward Muslims. Egged on by the ACLU, the media inaccurately tagged the order as a “Muslim ban,” even though visitors from most Muslim-majority countries in the world weren’t affected by it.

Eventually, the Supreme Court sided on the merits with Trump, finding 7–2 in December 2017 that a subsequent presidential directive on the same subject matter, Presidential Proclamation 9645, was constitutional. The Supreme Court ruling struck down lower court judges’ findings that the president acted improperly in imposing a temporary travel ban on individuals from Islamic, terrorism-infested nations.

“This a substantial victory for the safety and security of the American people,” U.S. Attorney General Jeff Sessions said at the time.

Republicans have been talking for years about splitting up the Circuit, which has the heaviest caseload of all U.S. appeals courts, into separate circuits, but they haven’t succeeded in Congress.

“The bill would also create a circuit-wide division, with a chief judge and four judges from each of the newly created regional divisions. This body would hear tax cases, appeals on final agency actions, and decisions on which the regional divisions have split. The proposal would also add five judgeships, bringing the total number to 34.

“For years, many have called for this court to be divided, but there remains widespread disagreement on how those divisions should be made,” Issa said.

“By dividing the Ninth Circuit into regional divisions that effectively function as individual appellate courts, we open the door to determining whether a circuit split would be feasible while, at the same time, preserve the current Ninth Circuit as a single appellate court,” he added.

Issa’s legislation and Trump’s three new Ninth Circuit nominations may satisfy some conservatives, at least for a while.

“The thinking among conservatives is that if we cannot have a conservative majority on the Ninth Circuit, then, at the very least, let’s not subject the conservative states in that circuit to the liberal majority,” Levey said.