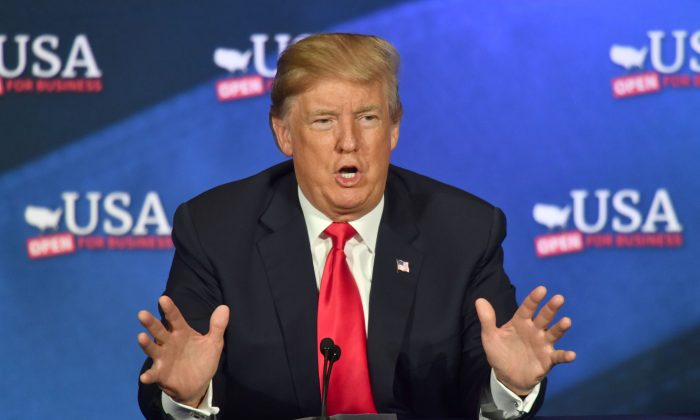 President Donald Trump speaks during a roundtable discussion on the new tax law in Cleveland, Ohio, on May 5. (NICHOLAS KAMM/AFP/Getty Images)
US News

WASHINGTON—President Donald Trump sought to mollify North Korean leader Kim Jong Un on May 17 after Pyongyang threatened to scrap an unprecedented summit, saying Kim’s security would be guaranteed in any deal and his country would not suffer the fate of Muammar Gaddafi’s Libya, unless that could not be reached.

In remarks given in the White House’s Oval Office in which he also sharply criticized China over trade, Trump said that as far as he knew, the meeting with Kim was still on track, but that the North Korean leader was possibly being influenced by Beijing after two recent visits he made there.

Trump distanced himself from comments by his national security adviser John Bolton, which has angered North Korea and led the regime to cast doubt on the summit, planned for June 12 in Singapore.

“North Korea is actually talking to us about times and everything else as though nothing happened,” Trump told reporters at the start of a meeting with NATO Secretary General Jens Stoltenberg.

Trump said he was not pursuing the “Libya model” in getting North Korea to abandon its nuclear weapons program. Bolton has repeatedly suggested the Libya model of unilateral disarmament for North Korea, most recently on May 13, this past Sunday.

Gaddafi was deposed and killed after Libyans joined the 2011 Arab Spring protests, aided by NATO allies who had encouraged him to give up his banned weapons of mass destruction under a 2003 deal.

In a statement on May 16 that threatened withdrawal from the summit, North Korea‘s first vice minister of foreign affairs, Kim Kye Gwan, derided as “absurd” Bolton’s suggestion of a deal similar to Libya’s, where components of its nuclear program were shipped to the United States.

“[The] world knows too well that our country is neither Libya nor Iraq which have met miserable fate,” Kim Kye Gwan said in apparent reference to the demises of Gaddafi and Iraq’s former president Saddam Hussein.

Trump said the deal he was looking at would give Kim Jong Un—a hereditary ruler who presides over a state widely criticized for serious human rights abuses—“protections that will be very strong.”

“The Libya model was a much different model. We decimated that country,” he said, adding that it would only come into play “most likely” if a deal could not be reached with North Korea.

Trump stressed that North Korea would have to abandon its nuclear weapons.

“We cannot let that country have nukes. We just can’t do it,” he said of North Korea, which has been working on missiles capable of hitting the United States.

Pyongyang has rejected unilateral disarmament and given no indication that it is willing to go beyond statements of broad support for the concept of universal denuclearization.

North Korea has said in previous, failed talks that it could consider giving up its arsenal if the United States provided security guarantees by removing U.S. troops from South Korea and withdrawing its so-called nuclear umbrella of deterrence from South Korea and Japan.

Trump told reporters that if the meeting with Kim happens, then “it happens”—and if not, the United States will go on to the next step. He did not elaborate.

Cancellation of the summit, the first between U.S. and North Korean leaders, would deal a major blow to what could be the biggest diplomatic achievement of Trump’s presidency, one his supporters have suggested would be worthy of a Nobel Peace Prize.

On May 16, Bolton brushed aside the North Korean remarks against him and said odds were still in favor of the summit going ahead.

“We are going to do everything we can to come to a successful meeting, but we are not going to back away from the objective of that meeting which is complete, verifiable, and irreversible denuclearization of North Korea,” he said.

The North Korean statements on May 16 marked a dramatic reversal in tone from recent months and took U.S. officials off guard after months of easing tensions.

In early May, three Americans detained in North Korea were released by the regime, and just a few days prior, Pyongyang had announced it would publicly shut its nuclear test site next week.

North Korea also called off a round of talks with South Korea, whose president, Moon Jae-in, is due to meet Trump on Washington next week on May 22. The regime expressed displeasure at joint U.S.-South Korean military exercises, which both allies have said will go ahead as planned.

North Korea‘s chief negotiator with the South called the South Korean government “ignorant and incompetent” on May 17 and threatened to halt all talks with Seoul unless its demands are met.

Some analysts and U.S. officials believe the North Korean regime may have been testing Trump’s willingness to soften the U.S. demand for complete denuclearization. It could also be trying to capitalize on an apparent gap in messaging between Bolton and U.S. Secretary of State Mike Pompeo.

Pompeo, who returned from his second visit to Pyongyang last week, has taken a softer line than Bolton, stressing the economic benefits, possibly including U.S. investment, that could flow to North Korea if it agrees to denuclearize.

Kim Kye Gwan said North Korea would never give up its nuclear program in exchange for trade with the United States.

By Steve Holland and David Brunnstrom