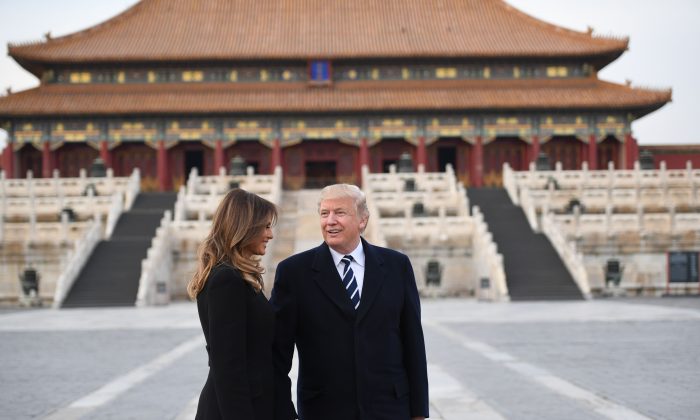 President Donald Trump’s tour of Asia aimed to send a signal through the Asia-Pacific that while the United States was there to support its allies, they had to stop picking its pockets.

He came home with $300 billion in signed deals and an important commitment from Chinese regime leader Xi Jinping to help denuclearize North Korea.

But beyond those immediate wins, Trump has outlined his vision for a new U.S.–Asia era and has begun developing the relationships he needs to make that possible.

“A relationship based on respect is much more important than anything else, including friendship. Because—this is really something—they have to respect our country,” Trump told a reporter on the flight back to Hawaii on Nov. 14.

“And they have not respected our country for a long period of time.”

During Trump’s trip, his often blunt public statements took aim at unfair trade practices, but they also laid out a vision of what he hopes the U.S.–Asia relationships can look like.

Over a period of years, they will be treating us much differently than they have in the past. President Trump

In one of many thinly veiled references to China and its efforts to dominate the region, Trump said the Indo-Pacific was emerging as a “beautiful constellation of nations, each its own bright star, satellites to none.”

The contest of influence in the Asia-Pacific between China and the United States is partially one of vision—what kind of world order countries want to create.

While Trump has made clear that he will focus on America first, he has also said repeatedly that he expects other countries to do the same.

That’s the reason, he said in a speech in Beijing on Nov. 9, why he was more critical of previous U.S. administrations for failing to hold China to account for its unfair trade practices than he was of China itself. Trump echoed that sentiment days later in his speech to the Asia-Pacific Economic Cooperation (APEC) CEO Summit in Da Nang, Vietnam, on Nov. 10.

“If their representatives are able to get away with it, they are just doing their jobs. I wish previous administrations in my country saw what was happening and did something about it. They did not, but I will,” Trump said in Vietnam.

But that new assertiveness would not come at the expense of other nations’ sovereignty, he said. The United States would not ask them to surrender intellectual property or form joint ventures—as China does—nor would it reject deals with state-owned enterprises—of which China has many.

The United States is looking for partners that “are thriving, prosperous, and dependent on no one,” he said.

The Trump administration has made a “free and open Indo-Pacific” the central thrust of its Asia policy. Trump’s remarks fleshed out that vision as “a place where sovereign and independent nations, with diverse cultures and many different dreams, can all prosper side-by-side and thrive in freedom and in peace.”

Promoting the sovereign dignity of the nation-state is the flip side to Trump’s rejection of multilateral deals that force countries to hand over decision-making powers to tribunals and trade lawyers.

And it is the insult to this dignity that fuels, in part, Trump’s appeal to Americans disgruntled over the trade relationship the United States has had with China and other Asian nations.

Trump told reporters on Air Force One that he would change that.

“Over a period of years, they will be treating us much differently than they have in the past,” he said.

“They ignored the rules to gain advantage over those who followed the rules, causing enormous distortions in commerce and threatening the foundations of international trade itself,” he told APEC attendees.

Trump’s remarks, while firm on trade, were greeted by a standing ovation after he left the podium, according to reports.

Speaking to reporters on the flight home, Trump said it wasn’t just Asia that was taking advantage of the United States, and that these unfair practices by countries around the world would no longer be ignored.

Trump said he expects the $300 billion in signed deals to triple or quadruple in short order, figures that could begin to mark a new era in U.S.–Asia trade.

There have been attempts by other administrations to address that imbalance, most notably the Trans-Pacific Partnership. The 11-nation trade deal faced bipartisan opposition in Congress even before Trump pulled out of it soon after his election.

Rather than multilateral deals, Trump said he will pursue bilateral deals with any Indo-Pacific nation that “will abide by the principles of fair and reciprocal trade.”

“What we will no longer do is enter into large agreements that tie our hands, surrender our sovereignty, and make meaningful enforcement practically impossible,” he said.

A major focus of Trump’s speeches and meetings with other heads of states was North Korea.

One key objective of the trip was to cement resolve by other leaders to denuclearize the Korean Peninsula and assure U.S. allies of the Trump administration’s commitment to the region.

Those assurances are backed up by three U.S. aircraft carriers and ongoing joint military exercises that have both raised the stakes for the Kim regime, and helped renew the Pax Americana that has secured trade and development throughout the region since the end of World War II.

One of Trump’s wins on that front was a commitment by Japanese Prime Minister Shinzo Abe to introduce additional sanctions against people and organizations associated with North Korea, including North Korean banks active in China.

While Trump’s position on China’s trade practices has been sharp, he has managed to secure unprecedented cooperation from the Chinese regime on passing and enforcing U.N. Security Council sanctions against North Korea.

Xi went further on Nov. 9, when he spoke of his “firm commitment to achieving denuclearization of the peninsula” during a joint press conference in Beijing.

While the statement received little attention, Trump noted it as a “big statement” for the Chinese leader and his regime’s position on the issue. No Chinese leader has taken this stance before.

Trump returned home having perhaps gained some new fans in Los Angeles, after he rescued three UCLA basketball players from prison for allegedly shoplifting sunglasses in the city of Hangzhou ahead of their season opener in Shanghai.

Trump helped secure the release of the players by raising the issue with Xi.