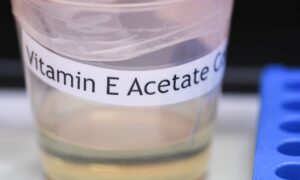 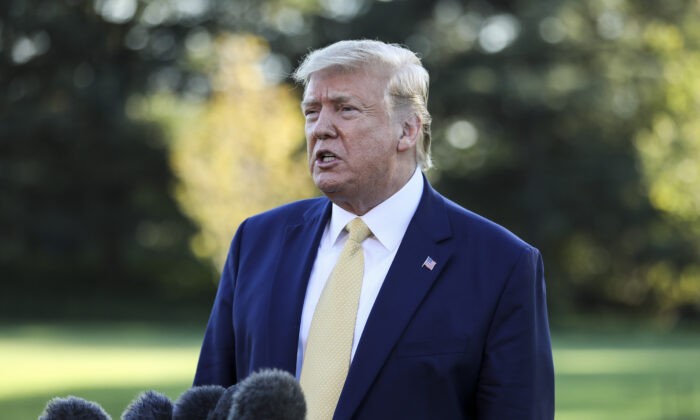 President Donald Trump speaks to media before departing the White House on Marine One on Oct. 11, 2019. (Charlotte Cuthbertson/The Epoch Times)
US News

Trump Says US Will Raise Age Limit for Vaping to 21

President Donald Trump said his administration is planning to raise the age limit for vaping to 21 years old, as U.S. health officials made a “breakthrough” recently in their investigation concerning the recent spate of vaping-related illnesses and deaths.

Trump told reporters the news at the White House on Nov. 8. He noted a final report by the administration on vaping would come out sometime next week. The president said they would be discussing e-cigarette flavors as well.

“We’re going to be coming out with a very important position on vaping,” Trump told reporters. “We have to take care of our kids, most importantly. So we’re going to have an age limit of 21 or so.”

Trump did not give any further details about the upcoming announcement. The White House did not immediately respond to a request for comment.

Health officials have been sounding the alarm amid a nationwide outbreak of serous lung illnesses linked to vaping, and have raised concerns about the use of electronic smoking devices, particularly among youth.

Tests of lung samples taken from 29 patients with vaping-related injuries suggest all contained Vitamin E acetate, a discovery U.S. officials described on Nov. 8 as a “breakthrough” in the investigation of the nationwide outbreak that has topped 2,000 cases.

The discovery of Vitamin E acetate in lung samples offers the first direct evidence of a link with the substance and vaping-related lung injuries. The substance has also been identified in tests by U.S. and state officials of product samples collected from patients with the vaping injury.

Vitamin E acetate is believed to be used as a cutting agent in illicit vaping products containing THC, the component of marijuana that gets people high.

According to the center, the vitamin is found in many foods including vegetable oils, cereals, meat, and fruits and usually does not cause harm when ingested as a vitamin supplement. But when Vitamin E acetate is inhaled, it “may interfere” with normal lung functioning, according to the CDC.

Vitamin E acetate is used as an additive in the production of e-cigarettes or vaping products “because it resembles THC oil.” The center said it is also used as a thickening ingredient in e-liquids.

In a telephone briefing on Nov. 8, Dr. Anne Schuchat, principal deputy director of the U.S. Centers for Disease Control and Prevention (CDC), called Vitamin E acetate “a very strong culprit of concern” and referred to the discovery as “a breakthrough” in the investigation.

She cautioned that more work is needed to definitively declare it a cause, and said studies may identify other potential causes of the serious injuries as well.

Schuchat said researchers must now establish a causal link between exposure and injury, adding that “many substances are still under investigation.”

As of Nov. 5, there have been 2051 cases of lung injury associated with e-cigarettes or vaping, according to a weekly count by the center. The cases were reported to the CDC from 49 states, (all except Alaska), the District of Columbia, and one U.S. territory.

Thirty-nine deaths have also been confirmed as of the latest count. The deaths were reported in 25 states and the District of Columbia.