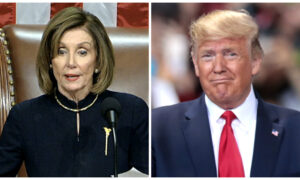 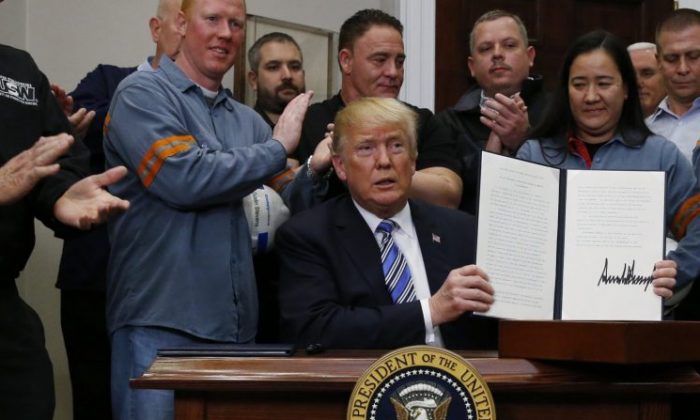 U.S. President Donald Trump holds up a proclamation during a White House ceremony to establish tariffs on imports of steel and aluminum at the White House in Washington, March 8, 2018. (Leah Millis/Reuters)
Trump Administration

President Donald Trump said on Friday, March 8, that he is working with the Australian prime minister on a security agreement that would exempt Australia from the recently imposed tariffs on steel and aluminum imports.

“Spoke to PM @TurnbullMalcolm of Australia. He is committed to having a very fair and reciprocal military and trade relationship,” Trump wrote on Twitter. “Working very quickly on a security agreement so we don’t have to impose steel or aluminum tariffs on our ally, the great nation of Australia!”

Spoke to PM @TurnbullMalcolm of Australia. He is committed to having a very fair and reciprocal military and trade relationship. Working very quickly on a security agreement so we don’t have to impose steel or aluminum tariffs on our ally, the great nation of Australia!

Brazil, Japan, South Korea, Australia, and Europe clamored for special treatment, while Chinese producers called on Beijing to retaliate in kind. Treasury Secretary Steven Mnuchin earlier said he expects countries in addition to Mexico and Canada to be exempted in the next couple of weeks.

The initial announcement caused threats of countermeasures, notably from the head of the European Union. Those threats have been overblown, according to Dani Rodrik, professor of international political economy at Harvard University’s John F. Kennedy School of Government and one of the world’s leading experts on trade.

“The reality is that Trump’s trade measures to date amount to small potatoes. In particular, they pale in comparison to the scale and scope of the protectionist policies of President Ronald Reagan’s administration in the 1980s,” Rodrik wrote on Friday.

Trump imposed the tariffs based on a report from the Department of Commerce, which found that the current state of the steel and aluminum market is a threat to U.S. national security. Foreign nations, especially China, have flooded the United States with unfairly priced, subsidized steel and aluminum, forcing prices down and hurting domestic manufacturers, the report found.

Brazil, which after Canada is the biggest steel supplier to the U.S. market, said it wanted to join the exemption list, and Argentina made a similar case.

The European Union, the world’s biggest trade bloc, chimed in. “Europe is certainly not a threat to American internal security so we expect to be excluded,” European Trade Commissioner Cecilia Malmstrom said in Brussels.

Trump campaigned on a promised to bring back American jobs and place American interests first.