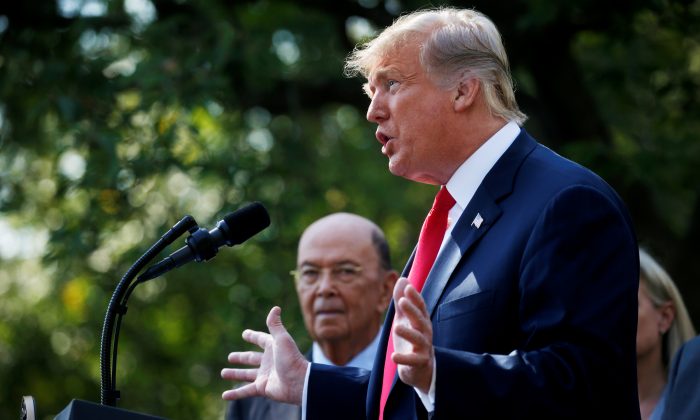 Trump Says Too Soon to Talk With China on Trade

WASHINGTON—U.S. President Donald Trump on Oct. 1 said it was “too soon” for Washington to talk to Beijing about working out a deal on trade, suggesting U.S. tariffs have yet to exert enough pressure to force Beijing into making concessions at the negotiating table.

“China wants to talk, very badly, and I said, ‘Frankly, it’s too early to talk.’ Can’t talk now, because they’re not ready,” Trump said during remarks on trade at the White House. “If, politically, people force it too quickly, you’re not going to make the right deal for our workers and for our country.”

During his remarks, which focused on a new U.S. trade deal with Canada and Mexico, Trump hailed the power of tariffs he has imposed to bring American trading partners to the table.

But he suggested steeps tariffs he has placed on U.S. imports of Chinese products have yet to bend Beijing’s will.

“Because they’ve been ripping us for so many years, it doesn’t happen that quickly,” Trump said.

The Trump administration slapped tariffs on $200 billion worth of Chinese goods last month and is threatening to impose duties on virtually all of the goods China exports to the United States.

Trump has said signs of economic weakness in China and its slumping stock markets are proof of the effect U.S. tariffs are having on the Chinese economy.

Still, Beijing has remained defiant, vowing to stimulate domestic demand to cushion the blow from any trade shocks.