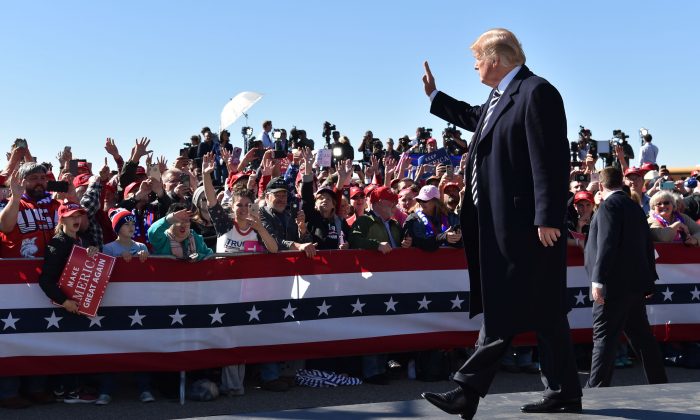 ELKO, Nevada—President Donald Trump said the administration was studying a tax cut for middle-income earners that could be rolled out some time around the beginning of November, just before pivotal congressional elections.

When asked about timing for the unveiling of the tax cuts, Trump said “sometime around the first of November, maybe a little before.”

Americans will vote Nov. 6 in elections in which Trump’s fellow Republicans will try to hold on to their majorities in the Senate and House of Representatives. Republican majorities in both houses are crucial for Trump to continue to carry out his agenda, which includes slashing taxes and red tape.

The median household income in the United States was about $55,000 in 2016, according to the U.S. Census Bureau.

In December, Trump signed into law the largest tax overhaul since the 1980s, which slashed the corporate rate from 35 percent to 21 percent and temporarily reduced the tax burden for most individuals as well.

The administration is beginning to pull together plans for the president’s fiscal 2020 budget proposal, which Trump will present to Congress early next year.

On Oct. 17, Trump told his Cabinet to come up with proposals to cut spending by their agencies by 5 percent but he suggested the military would be largely spared.