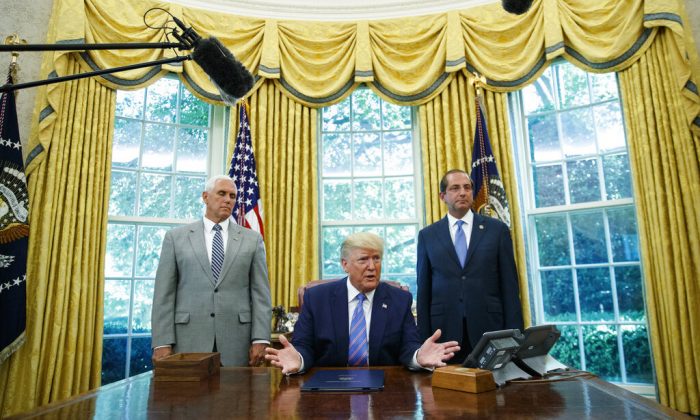 President Donald Trump, joined by Vice President Mike Pence, left, and Secretary of Health and Human Services Alex Azar, right, speaks during a signing ceremony in the Oval Office of the White House in Washington, Monday, July 1, 2019. The president signed a $4.6 billion aid package to help the federal government cope with the surge of Central American immigrants at the U.S.-Mexico border. (AP Photo/Carolyn Kaster)
US News

WASHINGTON—President Donald Trump said he plans to display battle tanks on Washington’s National Mall as part of a pumped-up Fourth of July celebration that will also feature flyovers by fighter jets and other displays of military prowess.

“You’ve got to be pretty careful with the tanks because the roads have a tendency not to like to carry heavy tanks, so we have to put them in certain areas,” Trump said.

This year, the president is organizing an event called “Salute to America” that will honor the U.S. military.

Trump plans to deliver a speech at the Lincoln Memorial. Also on the agenda are an extended fireworks display and flyovers by Air Force One, the custom Boeing 747 used by U.S. presidents, and the U.S. Navy’s Blue Angels jet squadron.

Trump has pushed for a military parade in Washington since he marveled at the Bastille Day military parade in Paris in 2017. His administration had wanted a parade that had been planned for Veterans Day in November 2018, but it was eventually postponed after costs ballooned to $90 million, three times the initial estimate.

The Interior Department, which oversees the event, has not said how much the event will cost. Two fireworks firms will put on a 35-minute display for free, which the agency said was equal to a donation of $700,000.