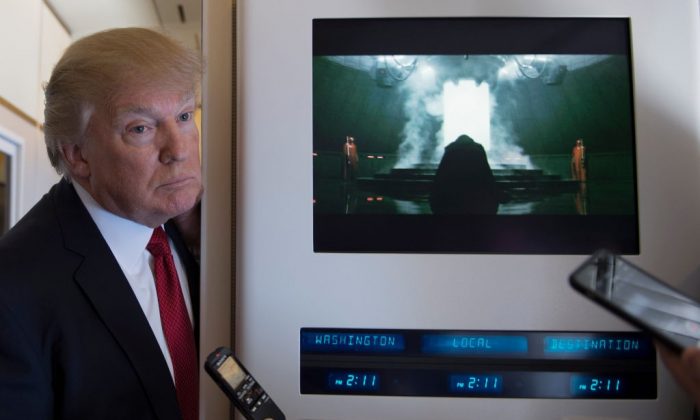 US President Donald Trump speaks to the press on Air Force One on April 6, 2017. (JIM WATSON/AFP/Getty Images)
Politics

Trump Says ‘Something Should Happen’ With Assad, US Military Studies Options

ABOARD AIR FORCE ONE/WASHINGTON—U.S. President Donald Trump said on Thursday that “something should happen” with President Bashar al-Assad after a deadly poison gas attack in Syria, as the Pentagon and the White House studied military options.

Facing his biggest foreign crisis since taking office in January, Trump suggested he may be taking a stronger stance against Assad, an ally of Iran and Russia, whose country has been torn apart by six years of civil war.

“I think what Assad did is terrible,” Trump told reporters traveling with him on Air Force One en route to Florida.

“I think what happened in Syria is a disgrace to humanity and he’s there, and I guess he’s running things, so something should happen,” Trump said, stopping short of calling on Assad to leave office.

The poison gas attack on Tuesday in the rebel-held northern Syrian town of Khan Sheikhoun killed at least 70 people, many of them children.

Striking Assad could put the United States on a collision course with Russia, which intervened on the Syrian president’s side in 2015, turning the tide of the conflict against mostly Sunni Muslim rebel groups in his favor.

Only last week, U.S. Ambassador to the United Nations Nikki Haley said the U.S. diplomatic policy on Syria for now was no longer focused on making Assad leave power, one of former President Barack Obama’s aims.

Trump said on Wednesday the gas attack in Idlib province, which angered people around the world, had caused him to think again about Assad.

Going further than Trump’s comments, U.S. Secretary of State Rex Tillerson said there may be no future for Assad as Syria’s leader.

“Assad’s role in the future is uncertain, clearly, and with the acts that he has taken it would seem that there would be no role for him to govern the Syrian people,” he said.

A U.S. official said detailed military options being discussed by the Pentagon and White House after the gas attack could include grounding aircraft used by Assad’s forces.

Such options would also include the use of cruise missiles, allowing the United States to strike targets without putting piloted aircraft in the skies above Syria.

Assad appears militarily unassailable in the areas of western Syria where he has shored up his rule with decisive help from Russia and Iranian-backed militias.

The official added that U.S. Defense Secretary Jim Mattis and White House national security adviser H.R. McMaster had already been in talks on the matter.

Mattis will presumably discuss the options when he meets with Trump at his Mar-a-Lago retreat in Florida, the official said. Mattis is due in Florida later on Thursday as part of a scheduled trip.

Russian President Vladimir Putin said on Thursday it was unacceptable to make “groundless” accusations over the Idlib attack. Moscow has suggested it will publicly stand by Assad and says the chemical weapons incident was likely caused by a leak from a depot controlled by Syrian rebels.

Turkey would welcome U.S. military action in Syria following the gas attack and would be ready to assist if needed, President Tayyip Erdogan was quoted as saying. Ankara has been a steadfast opponent of Assad and repeatedly called for his ouster.