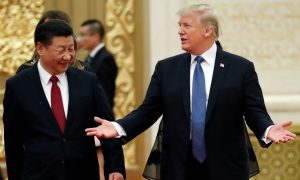 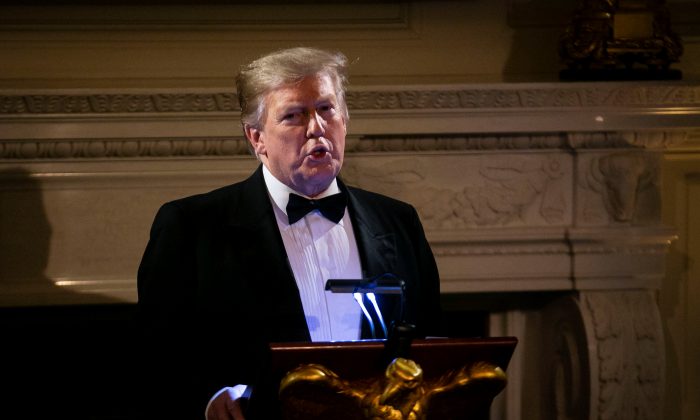 President Donald Trump speaks on U.S. and China trade negotiations at the Governors' Ball, in the State Dining Room of the White House, in Washington, DC on Feb. 24, 2019. (Al Drago/Reuters)
US-China Relations

WASHINGTON—President Donald Trump said on Feb. 25 he may soon sign a deal to end a trade war with Chinese leader Xi Jinping if their countries can bridge remaining differences, saying negotiators were “very, very close” to a deal.

Markets rallied after Trump said on Sunday he would delay an increase in U.S. tariffs on $200 billion of Chinese goods and extend his March 1 deadline for a deal.

Trump’s decision avoided another escalation in a trade war between the world’s two largest economies.

Washington is demanding Beijing change the way it does business with the United States, demanding more access for U.S. companies, enforcement of intellectual property protection and an end to industrial subsidies.

“So hopefully, we can get that completed. But we’re getting very, very close,” said Trump, who left later for Vietnam and a second summit with North Korean leader Kim Jong Un.

U.S. and Chinese negotiators met in Washington through the weekend, working toward a deal that would end a tit-for-tat tariff battle that began in mid-2018.

Trump cited progress in the talks as the reason for not raising tariffs further on Chinese goods. He also sounded a note of caution, when he said a deal “could happen fairly soon, or it might not happen at all.”

It remains unclear how long the tariff increase would be delayed. A spokeswoman for the U.S. Trade Representative’s Office said the agency had no announcements at this time beyond the president’s remarks.

Negotiators were still struggling to overcome differences on a mechanism to ensure that China fulfills any pledges it makes as part of the deal. Washington wants an enforcement mechanism built into the deal.

Assuming additional progress is made on both sides, Trump said he planned to meet with Xi at his Mar-a-Lago estate in Florida.

Trump told the governors “it looks like” Chinese negotiators would be returning quickly to continue work toward a deal.

Talks over the weekend with Chinese Vice Premier Liu He were handled by a small team of top-level negotiators, including U.S. Trade Representative Robert Lighthizer and U.S. Treasury Secretary Steven Mnuchin, said a source who had been briefed on the talks.

U.S. Secretary of Agriculture Sonny Perdue said on Monday that a number of agricultural issues were on the table in trade talks, including poultry access, issues over beef exports, feed grains, ethanol and an animal feed known as distillers grains.

“I thought it was a good sign that the Chinese extended their stay,” Perdue told reporters on Monday.

He said he understood discussions got into the “nitty-gritty” issues and that China’s vice premier “was directly involved in line-by-line negotiations over these issues, including agriculture.”

But Perdue noted the United States would not be “bought off” and that purchases themselves were not enough.

Later on Monday, Trump wrote in a tweet: “China Trade Deal (and more) in advanced stages. Relationship between our two Countries is very strong. I have therefore agreed to delay U.S. tariff hikes. Let’s see what happens?”