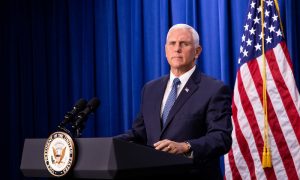 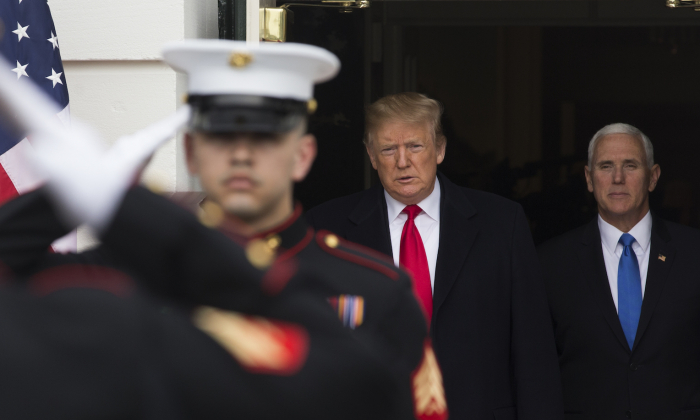 President Donald Trump said on July 5 that the public will learn the mystery behind the abrupt cancellation of Vice President Mike Pence’s trip to New Hampshire in “about a week or two.”

Pence canceled the planned trip on July 2 after being called back to the White House for an unspecified reason. The president described the reason only as a “very interesting problem” that didn’t have to do with the White House.

“You’ll know in about two weeks. A very interesting problem that they had in New Hampshire, but I can’t tell you about it. It had nothing to do with White House. There was a problem up there, and I won’t go into what the problem was, but you’ll see in about a week or two,” Trump said.

Pence had been scheduled to fly to Manchester, New Hampshire, to speak with former patients and others at the Granite Recovery Center, an addiction treatment facility, his official schedule showed.

“The vice president was called back to the White House, but there’s no cause for alarm and we’ll reschedule the trip soon,” Pence’s chief of staff, Marc Short, told Reuters.

An aide to Pence told a crowd awaiting the vice president in New Hampshire that he had been called back due to an emergency.

“Does not mean we won’t come back, but we do have a situation where the vice president was recalled to Washington,” the aide, Randy Gentry, said, according to a video posted on Twitter. “At this time, we’re going to ask, unfortunately, we’ll just go ahead and ask that you all–calmly–we’ll go ahead and have all of you leave the room.”

Pence’s spokeswoman clarified the statement on Twitter shortly after, saying there was no cause for concern.

Sound from Randy Gentry (Representative Of The Office Of the Vice President) on the cancellation of the event due to the @vp being recalled to Washington. @NBC10Boston @NECN #mapoli #fitn pic.twitter.com/lyPng0xdrL

Pence was scheduled to leave for New Hampshire at 10:15 a.m. before Short decided to cancel the trip.

“If it’s nothing, you’d think you’d give an explanation unless it’s so minuscule you’re going to offend the people you’re stiffing,” Joel Goldstein, an expert on the vice presidency, told The Washington Post. “It does seem bizarre that it would happen without an explanation.”