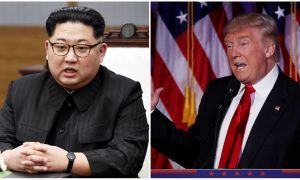 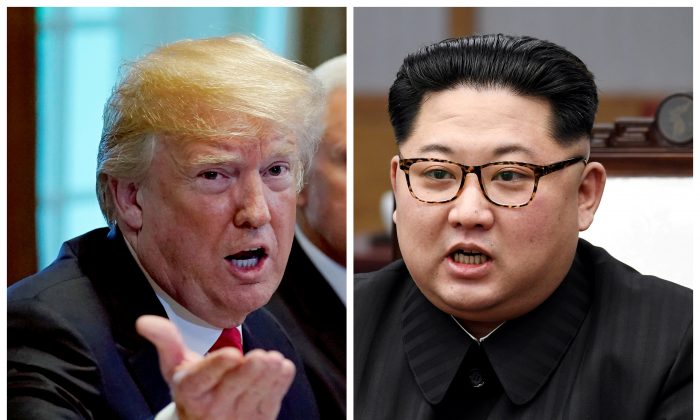 WASHINGTON–U.S. President Donald Trump sought on Thursday to placate North Korea’s leader Kim Jong Un after Pyongyang threatened to scrap an unprecedented summit. Trump said that he would guarantee Kim’s security if the United States and North Korea were to successfully make a deal for the complete denuclearization of the Korean peninsula.

Trump also said that if a deal was reached, North Korea would not suffer the fate of Muammar Gaddafi’s Libya.

Making his remarks to the media in the White House’s Oval Office, Trump said that the abrupt change in North Korea’s tune was possibly being influenced by Beijing, referring to recent meetings between North Korean and Chinese Communist Party officials, and also to the two recent meetings between Kim and Xi Jinping. But Trump said that as far as he knew, the meeting with Kim was still on track.

Trump also took the opportunity to sharply criticize China and the past U.S. administration over the huge U.S.-China trade imbalance.

When asked about national security adviser John Bolton’s remarks about the “Libya model,” Trump said that is “was a much different model.”

Bolton on Sunday referred to the model of unilateral disarmament that was used in Libya to ship components of Libya’s nuclear programme to the United States.

Trump said that reference to the Libya model would only come into play if a denuclearization deal could not be reached with North Korea.

Trump said the deal he was looking at would give Kim “protections that will be very strong.” North Korea has long feared that the United States would force a regime change in the country.

Trump stressed that North Korea would have to abandon its nuclear weapons.

“We cannot let that country have nukes. We just can’t do it,” he said of North Korea, which has been working on missiles capable of hitting the United States.

Pyongyang has now, again, rejected unilateral disarmament and has given no indication that it is willing to go beyond statements of broad support for the concept of universal denuclearization.

On Wednesday, Bolton said odds were still in favour of the U.S.-North Korea summit, planned for June 12 in Singapore, going ahead.

“We are going to do everything we can to come to a successful meeting, but we are not going to back away from the objective of that meeting which is complete, verifiable and irreversible denuclearization of North Korea,” he said.

The North Korean statements on Wednesday marked a dramatic reversal in tone from recent months and took U.S. officials off guard after months of easing tensions.

North Korea also called off a round of talks with South Korea, whose president, Moon Jae-in, is due to meet Trump on Washington next Tuesday, citing joint U.S.-South Korean military exercises, which both allies have said will go ahead as planned.

North Korea’s chief negotiator with the South called the South Korean government “ignorant and incompetent” on Thursday and threatened to halt all talks with Seoul unless its demands are met.

The drastic change in tone came after months of easing tension and just days after North Korea had announced it would publicly shut its nuclear test site next week and improved the mood for a U.S. summit by releasing the three detained Americans last week.

Some analysts and U.S. officials believe it may have been testing Trump’s willingness to soften the U.S. demand for complete denuclearization.

Others say it is possible that hardliners within the North Korean regime may be acting to disrupt the diplomatic negotiations that they see as a threat to the Kim dynasty.