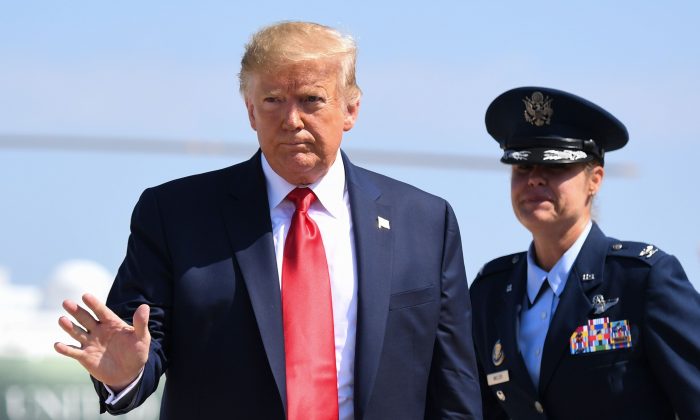 President Donald Trump said that the movie slated for a September release showing so-called deplorables being hunted by elite anti-Trumpers highlights the racism from Hollywood.

“Liberal Hollywood is Racist at the highest level, and with great Anger and Hate! They like to call themselves ‘Elite,’ but they are not Elite. In fact, it is often the people that they so strongly oppose that are actually the Elite,” he wrote on Twitter on Aug. 9.

“The movie coming out is made in order to inflame and cause chaos. They create their own violence, and then try to blame others. They are the true Racists, and are very bad for our Country!”

“The Hunt” shows 12 strangers waking up in a clearing without knowledge of how they got there, where they are, or why they’re there, according to the film’s official description.

Liberal Hollywood is Racist at the highest level, and with great Anger and Hate! They like to call themselves “Elite,” but they are not Elite. In fact, it is often the people that they so strongly oppose that are actually the Elite. The movie coming out is made in order….

….to inflame and cause chaos. They create their own violence, and then try to blame others. They are the true Racists, and are very bad for our Country!

“In the shadow of a dark internet conspiracy theory, a group of elites gathers for the very first time at a remote Manor House to hunt humans for sport. But the elites’ master plan is about to be derailed because one of the hunted, Crystal (Betty Gilpin, “GLOW”), knows The Hunters’ game better than they do. She turns the tables on the killers, picking them off, one by one, as she makes her way toward the mysterious woman (two-time Oscar® winner Hilary Swank) at the center of it all,” the description states.

While the film doesn’t explicitly say the people being hunted are supporters of Trump, the people are described by one of the elites as “deplorables,” a term coined by former presidential candidate Hillary Clinton, according to The Hollywood Reporter. The character also uses an expletive to refer to the president.

“Did anyone see what our [expletive]-in-chief just did?” one character asks others early in the movie, according to the outlet. “At least The Hunt’s coming up. Nothing better than going out to the Manor and slaughtering a dozen deplorables.”

The inference is the hunters are liberal elites and the people who are being hunted are supporters of Trump, and The Reporter further noted that the movie “follows a dozen MAGA types who wake up in a clearing and realize they are being stalked for sport by elite liberals.”

While Universal moves forward with the planned release of the violent film, which is supposedly satirical, two other companies owned by Comcast, NBC News and MSNBC, have relentlessly been pushing for gun control.

“Calling for gun control while profiting off of movies that feature gun violence with political protagonists pitted against each other is patently hypocritical, but that’s just another day in broadcast ‘news,’ where some in the media are doing more to divide this country and incite hatred and violence that anyone in politics could ever come close to doing,” Joe Concha, a media reporter with The Hill, told Fox News.

“I try to imagine a world where supporters of Elizabeth Warren or Alexandria Ocasio-Cortez are hunted down and murdered by a group of pro-Trump gun-wielding supporters and the media reaction to it. And the apocalypse has nothing on it compared to the overwhelming, front-page, wall-to-wall, 24/7 coverage such a film would receive.”

Trump also seemed to address the film while speaking to reporters outside the White House on Thursday while answering a question about his administration’s efforts to stop bias against conservatives.

“Hollywood—I don’t call them the ‘elites;’ I think the elites are people they go after, in many cases. But Hollywood is really terrible. You talk about racist—Hollywood is racist. What they’re doing, with the kind of movies they’re putting out—it’s actually very dangerous for our country. What Hollywood is doing is a tremendous disturbance to our country,” he said.

“We have now, in a little while, all of the heads of the biggest companies coming in, and we’re going to talk to them. They treat conservatives and Republicans totally different than they treat others. And they can’t do that.”