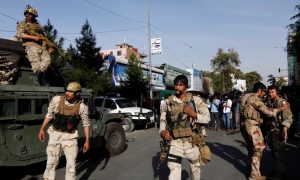 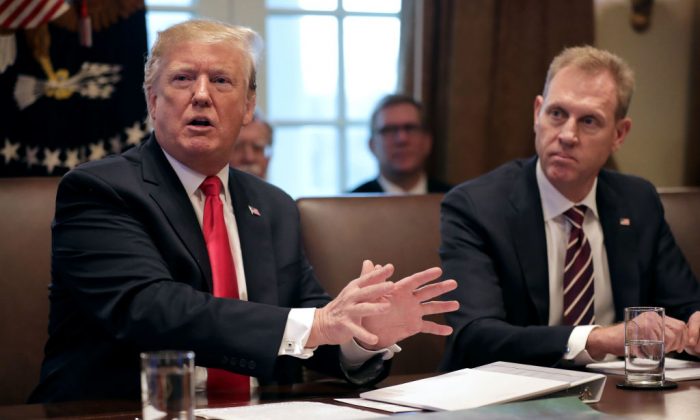 President Donald Trump (L) talks to journalists during a meeting with members of his Cabinet, including acting Defense Secretary Patrick Shanahan, at the White House in Washington, on Jan. 02, 2019. (Chip Somodevilla/Getty Images)
Trump Administration

In his first cabinet meeting of 2019, President Donald Trump expressed his dissatisfaction with the performance of U.S. military generals in Afghanistan, revealing he “essentially” fired Defense Secretary Jim Mattis—just days after the four-star general left his Pentagon post.

Speaking to reporters for almost two hours on Jan. 2, Trump lamented the situation in the Middle East and the conduct of his top military aides.

“I gave our generals all the money they wanted, they didn’t do such a great job in Afghanistan. They’ve been fighting in Afghanistan for 19 years,” Trump said.

The president described one case where he was frustrated about a general’s decision to keep U.S. troops fighting in the middle of two enemy forces.

“They go in and they end up fighting both of them. It’s the craziest thing I’ve ever seen. I think I would have been a good general, but who knows,” he continued.

Trump also deplored the performance of Mattis in the wide-ranging cabinet meeting and disparaged the general’s two-year role in leading the Defense Department.

Former President Barack Obama fired Mattis, often referred to as “Mad Dog,” in 2013 from the head of Central Command. He later joined the Trump administration in 2017.

The cabinet meeting was also the first one with Patrick Shanahan the Acting Secretary of Defense. Trump named Shanahan as Mattis’ replacement on Dec. 23, which resulted in Mattis leaving his post two months earlier than the previously planned February 2019 date.

Despite Trump’s criticisms of the military he praised Shanahan, who sat directly next to him, adding “you have done really [well], in particular, you have done a fantastic job” after Shanahan spoke about U.S. border security efforts.

Trump described how Mattis was thankful to him when he passed $700 billion in government funding for the 2018 defense budget and an additional $716 billion in this year’s budget.

However, Trump said Mattis gave him nothing in return.

“As you know, President Obama fired him, and essentially so did I,” Trump said. “I want results.”

In a Dec. 20 letter announcing his intention to resign, Mattis was highly critical of Trump and highlighted policy differences he had with the president. The general’s letter came on the heels of Trump’s decision to withdraw 2,000 U.S. troops from Syria, a move Trump said was necessary after declaring victory against the ISIS terrorist group.

In the letter, Mattis said the president deserved a secretary of defense “whose views are better aligned with yours on these and other subjects.”

No Withdrawal in Afghanistan

Wide-ranging media reports over the past few weeks suggest Trump ordered the Pentagon to withdraw about 7,000 U.S. troops from Afghanistan but a White House official said there has been no such order.

“The president has not made a determination to draw down [the] U.S. military presence in Afghanistan and he has not directed the Department of Defense to begin the process of withdrawing U.S. personnel from Afghanistan,” Garrett Marquis, a spokesman for the National Security Council, said in a statement on Dec. 29.

The 18-year war in Afghanistan is the longest American war effort ever and cost the lives of more than 2,400 Americans.

The United States has spent $6 trillion on post-9/11 wars in the Middle East, according to the Watson Institute of International and Public Affairs. America’s presence in Afghanistan this year was a hefty $45 billion.

Trump, in the past, had wanted to pull out of Afghanistan completely. However, in a 2017 speech he said he was committed to winning the war in Afghanistan and preventing a repeat of past mistakes when U.S. forces withdrew from Iraq.

In that speech at Fort Myer in Virginia, Trump shared the American people’s frustration about the long war. He said he changed his mind after ordering a comprehensive review of all options in Afghanistan and studying the situation in great detail.

Troop levels reached their peak at around 100,000 troops in 2010 under the Obama administration, President Barack Obama sharply reduced troop levels to less than 10,000 in 2016.

Rapid withdrawal from America’s remaining troops in Afghanistan could create a vacuum that terrorist groups such as ISIS and al-Qaeda could rapidly fill, similar to what happened in Iraq.

“We cannot repeat in Afghanistan the mistakes our leaders made in Iraq,” Trump said.