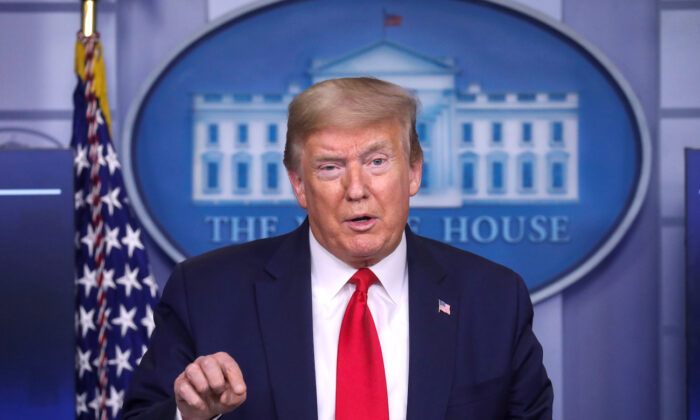 The ban on new green card issuances will last for 60 days, he said during a briefing on the CCP (Chinese Communist Party) virus pandemic.

His administration is currently working on the details of the executive order, which came about a day after Trump wrote on Twitter Monday that he would “temporarily suspend immigration into the United States.”

After the 60-day period is up, he will review the executive order and decide if it should be renewed, Trump said during the briefing. The order will likely be signed on Wednesday, he added.

The order “would protect American workers,” Trump said. “I want our American citizens to get jobs. I don’t want them to compete right now.”

In the briefing, Trump suggested there would be certain exemptions on the green card ban but didn’t elaborate.

“It would be wrong and unjust for Americans laid off by the virus to be replaced with new immigrant labor flown in from abroad,” he added.

Amid the pandemic, much of the U.S. immigration system has already ground to a stop. Most visa processing by the State Department has been suspended for several weeks as travel into the country has been restricted from much of the world.

In a statement, White House press secretary Kayleigh McEnany said the order was designed to protect the “health and economic well-being” of citizens during the CCP virus crisis.

The United States, Canada, and Mexico this week also agreed to place another suspension on unnecessary border travel ending in mid-May. Commercial traffic and a wide range of “essential” workers are still allowed to travel freely.

The Department of Homeland Security, in confirming the development, said an additional 30 days will be added to the restrictions, meaning that it will end around May 20.

Mexico’s foreign relations secretariat confirmed on Twitter the agreement to extend the restrictions, saying it came “after reviewing the development of COVID-19 propagation in Mexico and [the United States].” Canadian Prime Minister Justin Trudeau said the United States and Canada agreed to keep the border closed for another month, but he stipulated it would be likely much longer before the restriction is lifted.