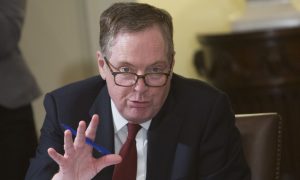 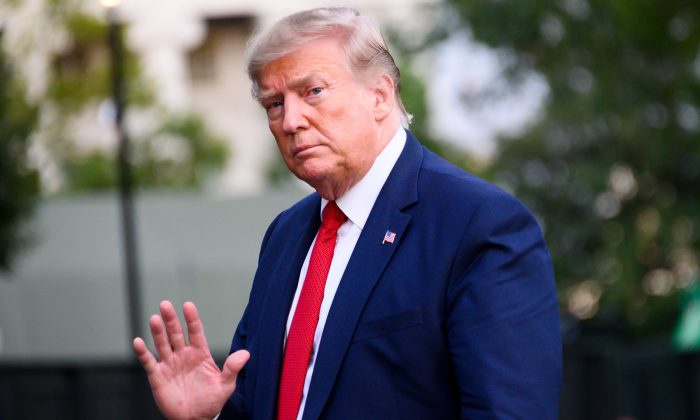 President Donald Trump waves as he arrives at the White House in Washington, on Aug. 21, 2019. (Jim Watson/AFP/Getty Images)
Trump Administration

Trump Says He Was ‘Having Fun’ With ‘Chosen One’ Remark, Calls out Media Misrepresentation

President Donald Trump said that he was just having fun when he referred to himself as the “chosen one” in the backdrop of the ongoing trade war with China.

“When I looked up to the sky and jokingly said ‘I am the chosen one,’ at a press conference two days ago, referring to taking on Trade with China, little did I realize that the media would claim that I had a ‘Messiah complex,’” Trump said in an Aug. 24 tweet. “They knew I was kidding, being sarcastic, and just having fun,” he continued.

When I looked up to the sky and jokingly said “I am the chosen one,” at a press conference two days ago, referring to taking on Trade with China, little did I realize that the media would claim that I had a “Messiah complex.” They knew I was kidding, being sarcastic, and just….

Trump made the “chosen one” comment earlier this week when speaking with reporters after a meeting with Romanian President Klaus Iohannis. He said that he is taking on China over its unfair trade tactics and intellectual property (IP) theft which have been “ripping off” the United States for decades, but that the reporting that followed had cast him in an unfair light.

“You know exactly when I meant,” Trump said on Friday. “It was sarcasm. It was joking. We were all smiling. And a question like that is just fake news.”

Among the over 1,000 cases of active FBI investigation into the theft of U.S. intellectual property, almost all of them lead back to China, according to FBI Director Christopher Wray.

Concerns of China’s IP theft and trade practices have been at the heart of the U.S.-China trade tensions. A 2018 investigation conducted by the U.S. Trade Representative’s office found that China was continuing its state-sponsored IP theft practices, prompting the United States to impose tariffs on $250 billion worth of Chinese goods.

“They’ve been hitting us for many, many years—for over $500 billion a year—taking out of our country much more than $500 billion a year,” Trump said before departing to the G-7 summit in France late Friday. “We want that stopped,” he added.

Trump has expressed optimism in reaching a deal with China that goes in the United States’s favor.

“We’re having a little spat with China, and we’ll win it,” Trump said. “We put a lot of tariffs on China today, as you know. They put some on us; we put a lot on them. We’re up to about $550 billion.” He added that the tariffs are “very good for us,” despite the fact that many people may not have realized it.

“We’re taking in tens of billions of dollars. China is paying for it.”

He pointed to a number of signs suggesting that China is feeling the pain from the trade dispute: “China has had … the worst year probably in anywhere from 30 to 50 years … And they want to make a deal.”

The U.S. Treasury Department has labeled China a “currency manipulator” after the latter allowed its yuan to weaken past the key 7-per-dollar level on Aug. 5, for the first time in over a decade, despite it having ample control over the yuan exchange rate. A cheaper Chinese currency would make goods cheaper abroad, thus offsetting some of the pressure on China during the trade war.

After asking U.S. companies to “start looking for an alternative to China” for manufacturing their goods, Trump hinted that he reserves the right to evoke the International Emergency Economic Powers Act of 1977, which would give the president authority to restrict assets of foreign companies based on national security concerns.

“This is more important than anything else right now … that we’re working on.”