Trump Says He Does Not Want US War With Iran 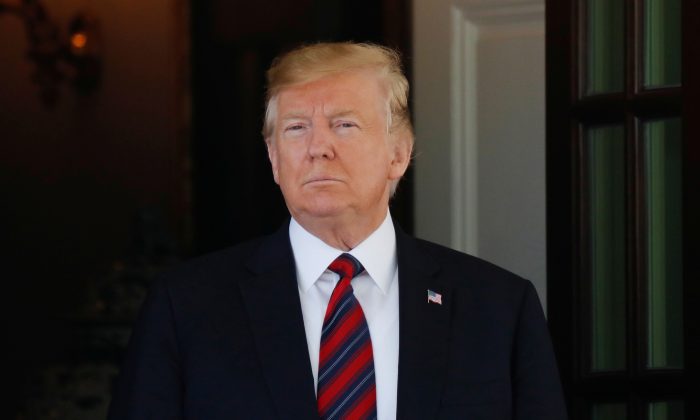 President Donald Trump at the White House on May 16, 2019. (Carlos Barria/Reuters)
By Reuters

WASHINGTON—U.S. President Donald Trump has told his top advisers he does not want to get the United States involved in a war with Iran, three U.S. officials said on May 16.

“He doesn’t want to go to war. It’s not who he is,” one official said, speaking on condition of anonymity.

Trump has communicated to his national security team and other aides, including the acting secretary of defense chief Patrick Shanahan, that he does not want to see tensions with Tehran escalate, the officials said.

But he has also made clear that he will protect U.S. interests in the region, one official said.

The New York Times and CNN made public details of U.S. intelligence reports to the White House saying that Iran’s Islamic Revolutionary Guards Corps had put fully assembled missiles aboard small boats in the Persian Gulf, citing media leaks from anonymous officials, which stoked fears that U.S. naval ships could be fired upon. The United States responded to the intelligence by sending a carrier strike group and a bomber task force that was in the Mediterranean, national security adviser John Bolton said on May 5.

The Wall Street Journal later reported on May 16 that Iran has repeatedly denied that it has any plans to attack U.S. forces, calling the intelligence being cited by U.S. officials as “fake intelligence.”

Trump won the 2016 election in part by promising to stay out of conflicts abroad after what he viewed as costly wars in Afghanistan and Iraq. Earlier this year he ordered U.S. troops out of Syria but was persuaded to leave some in.

Trump told reporters on Thursday that he hoped the United States was not heading to war with Iran as he met with Switzerland President Ueli Maurer, whose nation has served as a liaison conduit between the two countries since they do not have diplomatic relations.

“Hope not,” Trump said when asked by reporters if Washington was going to war with Tehran.

Tensions have escalated in recent days with increasing concerns about a potential U.S.-Iran conflict. Earlier this week, the United States pulled some diplomatic staff from its embassy in Baghdad following weekend attacks on four oil tankers in the Gulf.

“The president has been clear, the United States does not seek military conflict with Iran, and he is open to talks with Iranian leadership. However, Iran’s default option for 40 years has been violence, and we will protect U.S. personnel and interests in the region,” said Garrett Marquis, spokesman for the White House National Security Council.

A White House statement said the two leaders discussed “a range of international issues, including the crises in the Middle East and in Venezuela.”

Trump has said publicly he wants to pursue a diplomatic route with Iran a year after withdrawing the United States from the 2015 Iran nuclear deal.

Responding to reports of infighting between him and his advisers, such as White House national security adviser John Bolton, Trump tweeted, “There is no infighting whatsoever. Different opinions are expressed and I make a decisive and final decision – it is a very simple process. All sides, views, and policies are covered.

The Fake News Washington Post, and even more Fake News New York Times, are writing stories that there is infighting with respect to my strong policy in the Middle East. There is no infighting whatsoever….

“I’m sure that Iran will want to talk soon,” Trump added, indicating his preference for direct negotiations if needed, which would be contrary to the advice of some advisors, the WSJ reported.

White House spokeswoman Sarah Sanders told Fox News Channel’s “Fox & Friends” that there is no friction between Trump and his advisers and he welcomes different viewpoints.

“He’s the one the American people elected. He’s going to take in the information and the guidance from all of his national security team and he then will make a decision on what he thinks is the best and safest thing for the American people,” she said.

U.S. House Speaker Nancy Pelosi on Thursday welcomed what she called Trump’s lack of “appetite” for military conflict with Tehran.

Congressional sources said on Thursday that officials from the Trump administration will conduct classified briefings on the situation with Iran next week, after both Democratic and Republican lawmakers asked for more information.

Congressional aides said that Secretary of State Mike Pompeo, Joint Chiefs of Staff Chairman General Joseph Dunford and Shanahan would hold a session on Tuesday afternoon for all members of the Senate.

Aides in the House of Representatives said they also expected a briefing next week with Pompeo, but other details had not yet been made final.

By Steve Holland and Phil Stewart. With additional reporting by Epoch Times staff.