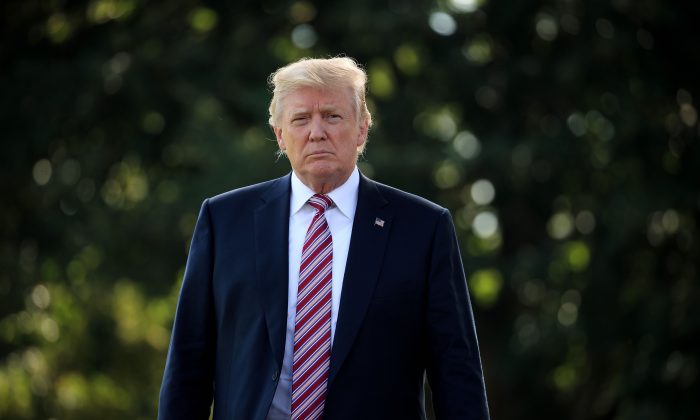 President Donald Trump walks toward reporters before boarding Marine One on the South Lawn of the White House in Washington, on Sept. 29, 2017. (Drew Angerer/Getty Images)
Politics

President Donald Trump said the FBI or Justice Department should release information on who paid for the dossier from opposition research company Fusion GPS, which spread unverified claims during the elections that Russia had compromising information on Trump.

The dossier was circulated among news outlets and government agencies during the 2016 presidential race, and was made public by BuzzFeed on Jan. 10. It played a significant role in framing the Trump-Russia narrative still being pursued by many government officials and mainstream news outlets.

As officials have attempted to verify the dossier’s claims, however, they have found not only that the claims cannot be proven, but that individuals behind the dossier are refusing to cooperate. The heads of Fusion GPS are also taking actions to prevent key information from being revealed.

House Intelligence Committee Chairman Devin Nunes (R-Calif.) issued a subpoena on Oct. 4 for Fusion GPS bank records that could reveal who paid the firm for the Russia report, but Fusion GPS is going to court in an attempt to block the House committee’s request.

This comes after Fusion GPS co-founder Peter Fritsch and top lieutenant Thomas Catan were subpoenaed to appear in a closed-door hearing before the committee, after attempting to avoid testifying.

When they testified on Oct. 18, Fox News reported that both Fritsch and Catan pleaded the Fifth “on every question posed by committee members.” Fusion GPS has refused to tell officials who paid for the dossier, and has also refused to reveal sources of its claims.

The Fifth Amendment gives Americans the right not to give testimony that would incriminate themselves.

Trump responded to their testimonies, and stated on Twitter on Oct. 21, “Officials behind the now discredited ‘Dossier’ plead the Fifth. Justice Department and/or FBI should immediately release who paid for it.”

Officials behind the now discredited "Dossier" plead the Fifth. Justice Department and/or FBI should immediately release who paid for it.

Fusion GPS is seeking a “temporary restraining order and preliminary injunction,” according to documents obtained by Fox News, which it hopes can block the information from being released. It claims that releasing the information would “deny Plaintiff and its clients their rights to free speech and expressive association as guaranteed by the First Amendment to the Constitution.”

It notes that committee Republicans argue that Fusion GPS is not a media organization, and is not entitled to such protections.

Fate of the Russia Narrative

The dossier from Fusion GPS is a key piece in the multiple investigations into alleged Russian interference in the 2016 election, and information that would prove or disprove its dossier could determine the outcome of the investigations.

This also comes after it was revealed that Fusion GPS was receiving money from a Russian official at the same time it created the dossier accusing Trump of having ties to Russia. William Browder, CEO and founder of Hermitage Capital Management, testified on July 27 that “In the spring and summer of 2016, they [Fusion GPS] were receiving money indirectly from a senior Russian government official.”

Trump and others who were named in the Fusion GPS report have repeatedly said that its claims are false.

Former British spy Christopher Steele, who was hired by Fusion GPS to compile the report, is also being sued for slander by Russian-born tech entrepreneur Aleksej Gubarev. According to The Washington Times, Steele admitted in his court filings that he “never verified” information in the dossier.

The investigations into Fusion GPS are facing opposition from within the government as well.

Someone identified by Fox News as a “congressional official” familiar with the matter told the network in a statement, “Democrats and Fusion GPS have tried to obstruct every effort to get the facts about the compilation of the Steele dossier and who paid for it, so it’s no surprise that Fusion GPS is saying they’ll continue to obstruct these efforts.”

“Fusion GPS is clearly paving the way to plead the fifth, and Congress is trying to find out if they’re trying to hide something,” it stated.