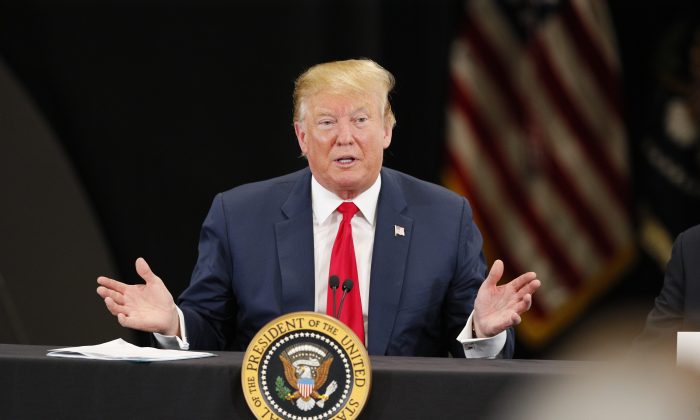 President Donald Trump speaks at a roundtable on the economy and tax reform at Nuss Trucking and Equipment in Burnsville, Minnesota, on April 15, 2019. (Adam Bettcher/Getty Images)
Trump Administration

President Donald Trump appeared to change course on Harley-Davidson Inc., pledging on April 23 to protect the motorcycle maker from European Union tariffs after criticizing the company last year for moving some of its manufacturing overseas amid a steel spat.

The company topped expectations for first-quarter profit on April 23 as Trump called the European tariffs against Harley “unfair.”

The president initially reacted with surprise last year to the news that Harley planned to shift some U.S. production overseas in a bid to avoid European Union duties. The EU raised the tariff on Harley-Davidson motorcycles to 31 percent from 6 percent as a countermeasure to Trump’s tariffs on steel and aluminum.

Trump’s initial reaction soon turned to criticism, as he claimed the company’s decision was just an “excuse” for them to justify their manufacturing changes. His latest comments, meanwhile, appeared to be more sympathetic to the motorcycle company.

“Harley-Davidson has struggled with Tariffs with the EU, currently paying 31%,” he said on Twitter. “They’ve had to move production overseas to try and offset some of that Tariff that they’ve been hit with which will rise to 66% in June of 2021. So unfair to U.S. We will Reciprocate!”

“Harley-Davidson has struggled with Tariffs with the EU, currently paying 31%. They’ve had to move production overseas to try and offset some of that Tariff that they’ve been hit with which will rise to 66% in June of 2021.” @MariaBartiromo So unfair to U.S. We will Reciprocate!

Earlier this year, Harley said the retaliatory import duties imposed by the EU on its bikes would cost the company between $100 million and $120 million in 2019.

The raised tariffs would add approximately $2,200 to the cost of a motorcycle. The company said in a regulatory filing last year that it doesn’t plan to increase prices as it adjusts to the tariffs.

“In the near-term, the company will bear the significant impact resulting from these tariffs, and the company estimates the incremental cost for the remainder of 2018 to be approximately $30 million to $45 million,” the company stated in a filing.

In Trump’s rebuke of the motorcycle maker’s decision last year, he accused the EU of “long [taking] advantage of the U.S.,” but added that “in the end, it will all even out.” His administration has battled against eliminating tariffs and trade barriers that harm the interests of the United States.

Amid the steel dispute, Trump also welcomed a boycott planned by Harley-Davidson owners and called for higher taxes on the company.

The iconic “Made in America” manufacturer defended its decision to shift some production overseas by saying the move was the only sustainable option to maintain a viable business.

“Many @harleydavidson owners plan to boycott the company if manufacturing moves overseas. Great!” Trump wrote on Aug. 12. “Most other companies are coming in our direction, including Harley competitors. A really bad move! U.S. will soon have a level playing field, or better.”

Meanwhile, China’s tariffs on the bikes exported from the United States have increased to 55 percent from 30 percent, as a result of the trade war between the world’s two biggest economies.

The company topped expectations for first-quarter profit by more than 30 cents per share and stuck to shipment forecasts for the whole of 2019, which some analysts had expected to be cut.

Overall sales, however, continued to fall. U.S. retail motorcycle sales, or sales by dealers to customers, fell 4.2 percent in the first quarter ended March. 31. European sales were down 2.1 percent.

The company’s net income fell 26.7 percent to $127.9 million in the quarter, while revenue from motorcycles and related products fell 12.3 percent to $1.19 billion, roughly in line with forecasts.