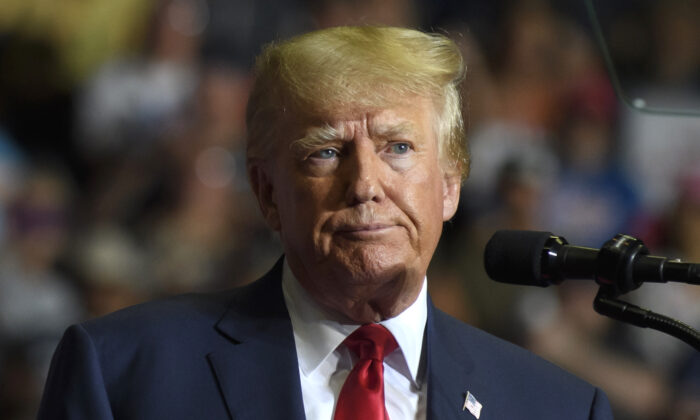 Former President Donald Trump speaks at a "Save America" rally to support Republican candidates running for state and federal offices in the state at the Covelli Centre in Youngstown, Ohio, on Sept. 17, 2022. (Jeff Swensen/Getty Images)
Donald Trump

Former President Donald Trump has defended his 2020 phone call to Georgia Secretary of State Brad Raffensperger, stating that it was “absolutely perfect,” while taking aim at Fulton County District Attorney Fani Willis after she threatened prison time for those convicted in her election probe.

Trump made the comment in a statement issued via his Save America PAC on Sept. 19.

It comes amid a probe into alleged efforts by Trump and a number of his allies to overturn the 2020 election. The election inquiry was launched last year and is being fronted by Willis, a Democrat, who has been working with a grand jury to convince officials in Georgia to investigate the matter.

Willis says the probe is based on a “multi-state, coordinated plan by the Trump campaign to influence the results of the November 2020 elections in Georgia and elsewhere.”

Trump in his statement on Monday, criticized Willis for “spending almost all of her waking hours, which aren’t many, on attempting to prosecute a very popular president.”

He added that Willis “is basing her potential claims on trying to find a tiny word or phrase (that isn’t there) during an absolutely PERFECT phone call, concerning widespread Election Fraud in Georgia.”

He further noted that “many lawyers and other officials who were knowingly on the line” during his call with Raffensperger had “no problems with the call, and didn’t voice any objections or complaints about anything that I said on the call which could be construed as inappropriate.”

The phone call in question took place in January 2021 and during the conversation, Trump asked the secretary of state to probe potential voter fraud in Georgia.

Willis says that during the call, Trump said he wanted to “find “over 11,000 votes needed to win the state. Raffensperger declined, noting the state did several re-tallies of the vote count.

However, Willis’s probe has largely expanded in recent months and a number of close Trump allies and advisers, and officials from other states, as well as Raffensperger, have appeared before the special grand jury.

Others who have given testimony include attorney Rudy Giuliani, who represented Trump during the 2020 election, Sen. Lindsey Graham (R-S.C.), and former White House Chief of Staff Mark Meadows.

Trump’s defense of his phone call with Raffensperger comes shortly after Willis said in an interview with The Washington Post that individuals involved in the alleged efforts to overturn the election results may face jail time.

“The allegations are very serious. If indicted and convicted, people are facing prison sentences,” Willis said.

Willis also said that Trump himself could be called to appear as a witness before the special grand jury, noting that “a decision is going to have to be made,” and that “I imagine it’s going to be made late this fall.”