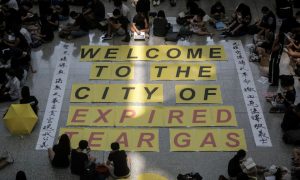 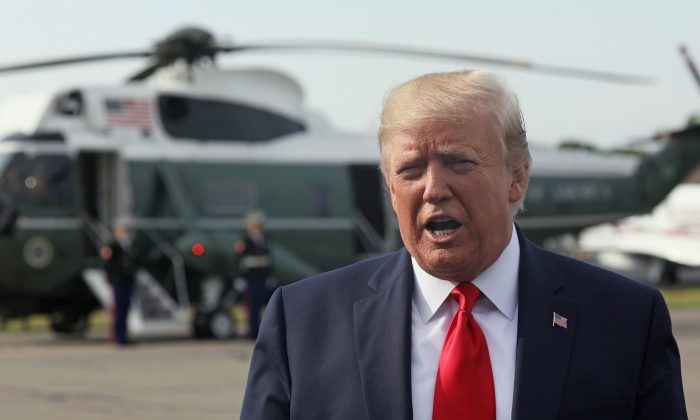 Hong Kong is seeing its 11th straight week of mass protests against Beijing’s growing encroachment into the city.

“If President Xi would meet directly and personally with the protesters, there would be a happy and enlightened ending to the Hong Kong problem. I have no doubt!” Trump wrote on Twitter on Aug. 15.

The night before, Trump offered to meet with Xi to resolve the issues in Hong Kong.

“I know President Xi of China very well. He is a great leader who very much has the respect of his people. He is also a good man in a ‘tough business,’” Trump wrote on Twitter.

Later on Aug. 15, when asked if he was concerned about the regime using force to end the protests, Trump said, “I am concerned.”

The ongoing protests center around a now-suspended extradition bill that would allow anyone in Hong Kong to be transferred to mainland China for trial, where there is no rule of law. The demonstrations have since swelled into greater calls for democracy.

Trump also mentioned Hong Kong in another series of tweets on Aug. 14 about the trade dispute with China.

“Of course China wants to make a deal. Let them work humanely with Hong Kong first!” he wrote.

On Aug. 1, Trump, frustrated with the progress of trade talks, announced that tariffs of 10 percent would be imposed in September on $300 billion worth of Chinese imports.

The Trump administration earlier this week delayed until mid-December tariffs on some of the $300 billion list of Chinese goods, including smartphones and laptops.

Beijing said it would retaliate if the U.S. tariffs go ahead.

In response to Trump’s tweets linking Hong Kong to the trade talks, Chinese Foreign Ministry spokesperson Hua Chunying on Aug. 15 suggested that the United States shouldn’t intervene in the matter.

Hua didn’t directly respond to Trump’s invitation to personally meet with Xi, saying, “the Chinese and US presidents have remained in contact with each other via meetings, phone calls, and letters.”

Tang Jingyuan, a U.S.-based China commentator, told The Epoch Times that Trump’s remarks were made in the aftermath of an unexpected meeting between U.S. Secretary of State Mike Pompeo and Chinese high-level diplomat Yang Jiechi in New York on Aug. 13.

Both sides didn’t release any details of what was discussed in the meeting.

Tang said Yang’s visit to the United States suggests the regime wants to separate trade talks from the crisis in Hong Kong.

“The Chinese Communist Party (CCP) cannot afford to fight the United States on both fronts [trade talks and Hong Kong],” he said.

“The CCP’s strategy is to take a softer approach with the trade talks but go tough on Hong Kong. It doesn’t want the United States to step in on the situation in Hong Kong,” Tang said.

Yang is director of foreign affairs for the Chinese Communist Party (CCP), as well as deputy director of a Party body that oversees Hong Kong and Macau affairs.

Given that Yang hasn’t been involved in the U.S.–China trade talks and his Party role involves overseeing Hong Kong affairs, it’s likely the protests were a key topic during his meeting with Pompeo, Tang said.

In addition, on the eve of Yang’s visit, the regime moved paramilitary armored vehicles to the border with Hong Kong, further intensifying the situation.

Yang said it’s likely the Chinese leadership sent Yang to gauge the U.S. reaction to a possible military crackdown on the protests in Hong Kong.

Gordon Chang, China expert and author of the book “The Coming Collapse of China,” told The Epoch Times that the United States should take a strong stance against the regime on the issue of Hong Kong.

He said that if the regime deploys the military or paramilitary to the city to quell the protests, then “all bets are off”—putting an end to U.S.–China trade negotiations.

The communist regime, he said, has shown an unwillingness to make reasonable concessions during trade talks, and will only co-operate if the United States “pushes China to the edge of a cliff.”

The Trump administration could do this by further raising tariffs on Chinese goods beyond 25 percent, applying economic pressure on the regime, Chang said.

Epoch Times staff Cathy He contributed to this report.