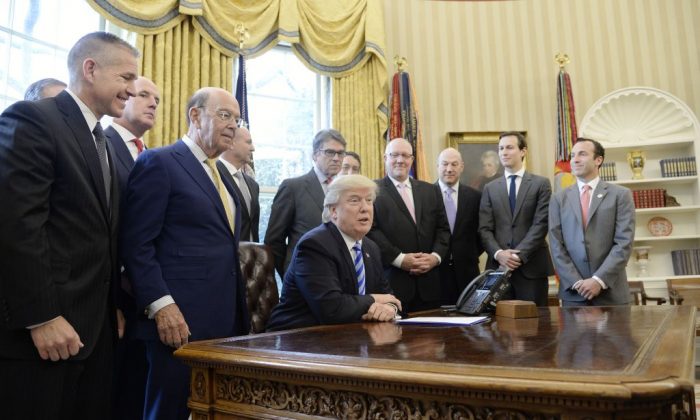 U.S. President Donald Trump during a National Economic Council meeting in the Oval Office at the White House in Washington on March 24, 2017. (Olivier Douliery-Pool/Getty Images)
US

At a White House event with the second-largest U.S. cable company’s Chief Executive Thomas Rutledge and Texas Governor Greg Abbott, Trump praised Charter for planning to close its offshore call centers and move them to the United States.

On a number of occasions, Trump has touted job announcements at the White House that had been planned or announced previously.

The company said in October it planned to add 20,000 jobs as part of its acquisitions of Time Warner Cable and Bright House Networks.

The company said in February 2016 it planned to close foreign Time Warner Cable call centers and move the jobs to the United States.

Charter, which has 24 million residential and business customers in 41 states, said Friday it had committed to Trump to hiring those workers within four years. It plans to invest $25 billion in broadband infrastructure and technology in the next four years.

Last year, as part of winning approval to acquire the cable networks from the Federal Communications Commission, Charter agreed to extend high-speed internet access to another two million customers within five years, with one million served by a broadband competitor.

Charter also touted its plans to open a new bilingual call center in McAllen, Texas and said it expects to employ 600 there by the end of 2018.