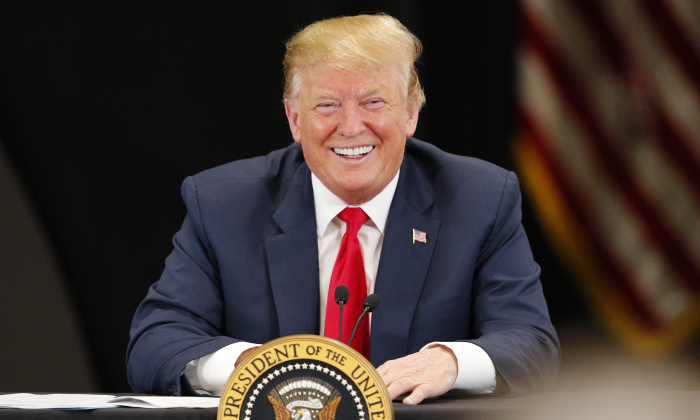 Trump Expects Biden and Sanders Will Be Finalists in Democratic Primary

In characteristic style, the president assigned nicknames to both candidates.

“I believe it will be Crazy Bernie Sanders vs. Sleepy Joe Biden as the two finalists to run against maybe the best Economy in the history of our Country (and MANY other great things)!” Trump wrote on Twitter on the evening of April 16.

“I look forward to facing whoever it may be. May God Rest Their Soul!” the president added.

In running an average of the polls tallied by Real Clear Politics, Biden and Sanders hold a comfortable lead over the rest of the Democratic candidates. Biden, who has not yet officially announced his candidacy, leads Sanders by more than 9 percentage points.

For the first time since early polling began, Sanders beat Biden on April 15 by five points in a Morning Consult survey. Sanders, a self-identified socialist, leads the Democratic field in fundraising, bringing in $18 million in the first quarter of 2019. Biden has not yet disclosed his fundraising figures since he has not yet officially declared his candidacy.

Trump raised $30 million in the first quarter of 2019. The Republican National Committee, which is raising funds for Trump victory in a parallel effort, raised an additional $45.8 million, the most ever in a nonelection year. While many Democrats tout raising the bulk of their contributions from small donors, Trump beat the entire Democratic field in this metric, bringing in almost 99 percent from donors who gave less than $200.

Trump tagged Sanders with the “crazy” nickname in May 2016, when Sanders faced off with Hillary Clinton for the Democratic nomination. Trump’s nickname for Clinton is “crooked.” The president’s nickname for Biden is new. Trump previously used the same term to tag NBC’s Chuck Todd, calling him “sleepy” or “sleepy eyes” since at least 2011.

If Biden enters the race, he will be quickly forced to address a hard-left shift in the Democratic Party. While the socialist Medicare for All policy by Sanders had no support six years ago, it is now embraced by all leading Democrats running for president. During a recent speech, Biden addressed health care but steered clear of either endorsing or embracing Medicare for All.

Medicare for All would virtually eliminate private health insurance in favor of a government monopoly on health care. The socialist policy would cost $32 trillion in the first decade. With total projected government spending for the next decade estimated at $60 trillion, Medicare for All could increase the burden on taxpayers by more than 50 percent.