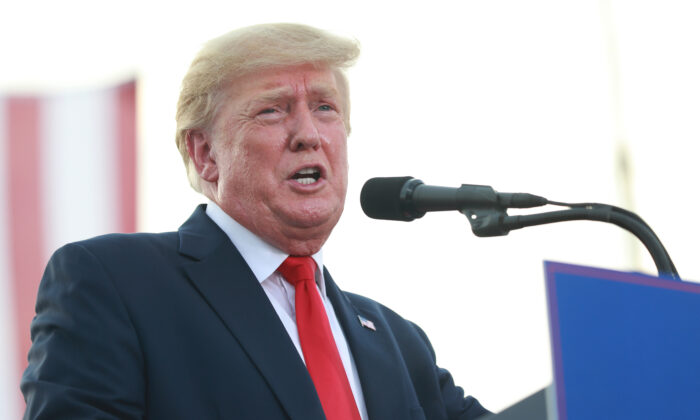 Former President Donald Trump said it would be a “terrible mistake” if the Biden administration decided to combat inflation by lifting tariffs on Chinese goods. Moreover, Trump said such a decision would make the United States look “weak.”

“Believe it or not, it is looking more and more like the United States is getting ready to remove the tariffs on China. This would be a terrible mistake,” Trump said in a statement released on his Truth Social account on July 5.

“Doing this would be the greatest gift that China could ever receive,” he continued. “Taking these tariffs off would be a clear signal that the United States is weak, ineffective, and doing business as usual.”

Trump began hitting China with tariffs after a U.S. Trade Representative (USTR) investigation in 2018 found that the communist regime was engaging in illegal practices, including excessive government subsidies and intellectual property theft.

Beijing retaliated by slapping tariffs on U.S. goods, bringing the two nations into a trade war.

However, the Chinese Communist Party (CCP) hasn’t fulfilled its promises under the deal. According to the Peterson Institute for International Economics (PIIE), China bought only 57 percent of the U.S. exports it had promised to buy. In other words, the Chinese regime “bought none of the additional $200 billion of exports Trump’s deal had promised,” PIIE’s senior fellow Chad Bown stated.

It has been more than a month since the Biden administration revealed that it was considering removing the Trump-era China tariffs. In June, U.S. Treasury Secretary Janet Yellen told a House hearing that “some reductions may be warranted and could help to bring down the prices of things that people buy that are burdensome.”

U.S. inflation jumped to 8.6 percent in May, the highest level in 40 years.

However, the suggestion that cutting tariffs would ease inflation is disputed by two PIIE researchers. According to their report released last month, removing tariffs on Chinese imports “could lower consumer price index (PCI) inflation by 0.26 percent point—only marginally reducing inflation.”

“So… revoking tariffs won’t do anything about inflation,” AAM wrote. “But… doing so will hand the CCP a big win and undermine America’s manufacturers and factory workers.”

Read More
Ending China Tariffs Will Worsen America’s Economy
Will Chinese Tariffs Be Sacrificed on the Altar of High Inflation?

Trump praised what his tariffs on China have accomplished.

“These tariffs have brought many billions of dollars to our country, and made affected businesses, such as steel, viable again in the United States,” Trump wrote on his Truth Social account.

“Our farmers alone got $28 billion as a gift from me, that came directly out of the tariffs because of the way they were abused by China.”

Trump concluded his statement by criticizing U.S. lawmakers who wanted to remove the tariffs on China.

“Certain senators are fighting hard to get this done, even saying such ridiculous things as it ’causes inflation,'” Trump wrote, without naming a lawmaker. “Those senators should be questioned as to their real motives!”

Sen. Tim Kaine (D-Va.), in his op-ed published by Daily Press on July 3, denounced the Trump-era tariffs as “direct taxes on American families and importers.” He added that removing “these tax hikes would reduce costs for consumers and allow manufacturers that rely on imported components to be more competitive in the global marketplace.”

“Given the high inflation in the U.S., the sooner these tariffs on China are removed, the sooner it will benefit American consumers and businesses,” Zhao said.

However, two GOP senators recently said that the Biden administration is going about the wrong way to fight inflation.

“Biden’s plan to roll back the Trump administration’s tariffs on Communist China would be a step in the wrong direction, and it’s not a real solution to Biden’s inflation problem,” Sen. Marsha Blackburn (R-Tenn.) wrote on Twitter on July 5.

Sen. Tom Cotton (R-Ark.), in an interview with Fox News on July 5, said the Biden administration’s plan to roll back the China tariffs “is just another example of Joe Biden blaming inflation on anyone but himself.”

“We have had these tariffs in place for three or even four years, and we didn’t have inflation when it started,” he said. “The problem here is Joe Biden’s policies and especially his energy policy because the price of gasoline and electricity drives the cost of everything else.

“Joe Biden needs to look in the mirror at the White House if he wants to find the problem and perhaps the solution for inflation.”