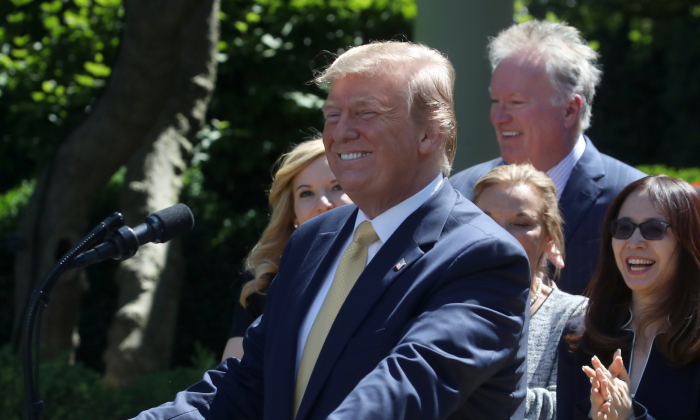 President Donald Trump arrives to speak about expanding healthcare coverage for small businesses in the Rose Garden of the White House on June 14, 2019 in Washington. (Mark Wilson/Getty Images)
Trump Administration

President Donald Trump made fun of low attendance numbers at pro-impeachment rallies held across the nation on June 15.

“Yesterday was the Radical Left Democrats big Impeachment day. They worked so hard to make it something really big and special but had one problem – almost nobody showed up,” the president wrote on Twitter on June 16.

More than 140 rallies calling for Trump’s impeachment were expected to be held throughout the country on June 15, according to The Mercury News.

A handful of news reports about the rallies, which were big enough to make it onto local media, show sparse gatherings of about 100 people. An impeachment rally in downtown Portland, Oregon—a hotspot of the anti-Trump movement—drew roughly 200 people, with the local left-leaning newspaper calling the gathering a “small crowd.”

A total of 60 Democrats in Congress are openly calling for the House of Representatives to initiate impeachment proceedings against Trump, according to a tally maintained by The Hill. House Speaker Nancy Pelosi (D-Calif.), who has the power to start the proceedings, currently opposes doing so.

Calls for impeachment among Democrats ramped up after special counsel Robert Mueller concluded his investigation into allegations of collusion between the Trump campaign and Russia. Mueller didn’t find sufficient evidence to establish that Trump colluded with Russia. The special counsel also didn’t make a decision regarding whether the president obstructed justice.

The description of the impeachment rallies by the events’ organizer, MoveOn, mentioned neither collusion nor obstruction. The organizer instead alleges that the president has abused “our communities and country.”

“Donald Trump’s abuses of our communities and country demand action from Congress, which has the responsibility and authority to hold Trump accountable,” the event page states. “The next crucial step is an inquiry into whether to draft articles of impeachment.”

Since regaining control of the House of Representatives, Democrats have used congressional investigative powers to target Trump, current and former White House staff, as well as the president’s family and associates. Four Democrat-led committees are running separate investigations into issues ranging from alleged Russia collusion to Trump’s business dealings and tax returns.

The president calls the investigations “presidential harassment,” and Republicans have criticized the effort as an abuse of power with the intent of scoring political points for the 2020 election.

An impeachment decision by the House requires a simple majority, which the Democrats have. Impeachment is the first step in the process of removing a high-level government official. To actually remove the official, a supermajority vote in the Senate is needed.

In Trump’s case, Senate Majority Leader Mitch McConnell (R-Ky.) said a removal petition would be quickly disposed of, signaling that any impeachment action would be dead on arrival at the Senate.