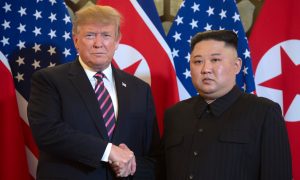 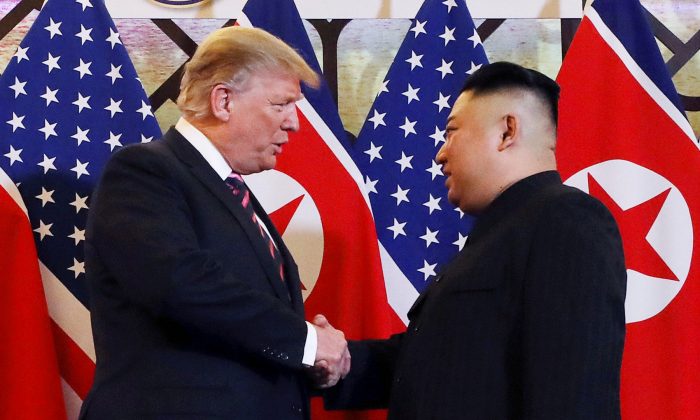 WEST PALM BEACH, Fla.—President Donald Trump on March 22, reversed North Korea sanctions imposed by the U.S. Treasury Department just a day earlier and the White House said he was doing so because of warming relations with North Korean leader Kim Jong Un and did not consider them necessary.

“It was announced today by the U.S. Treasury that additional large-scale Sanctions would be added to those already existing Sanctions on North Korea,” Trump tweeted from his Florida resort of Mar-a-Lago. “I have today ordered the withdrawal of those additional Sanctions!”

There were no new U.S. sanctions on North Korea announced on Friday and Trump was apparently referring to the U.S. Treasury’s blacklisting on Thursday of two Chinese shipping companies that it said helped North Korea evade sanctions over its nuclear weapons program.

It was announced today by the U.S. Treasury that additional large scale Sanctions would be added to those already existing Sanctions on North Korea. I have today ordered the withdrawal of those additional Sanctions!

White House spokeswoman Sarah Sanders did not specify which sanctions Trump spoke of, but said: “President Trump likes Chairman Kim and he doesn’t think these sanctions will be necessary.”

The White House and U.S. Treasury did not immediately respond to requests for clarification. The State Department referred queries to the White House.

Important actions today from @USTreasury; the maritime industry must do more to stop North Korea’s illicit shipping practices. Everyone should take notice and review their own activities to ensure they are not involved in North Korea’s sanctions evasion. https://t.co/AVnOPrWbH6

The sanctions on the Chinese shippers announced on Thursday were the first since the summit, which collapsed over conflicting demands by North Korea for sanctions relief and by the United States for North Korea to give up its nuclear weapons.

Trump has stressed his good personal relationship with Kim and his administration has stressed its willingness to reengage with North Korea. The country is still one of the most closed societies in the world that continues to deny basic freedoms, run political prison camps and strict surveillance of its citizens, the United Nations human rights investigator said on March 8.

There has been no sign of direct contact between Washington and Pyongyang since the Feb. 27-28 meeting in Hanoi, however, and North Korea has warned it is considering suspending talks and may rethink a freeze on missile and nuclear tests, in place since 2017, unless Washington makes concessions.

Hours after Thursday’s sanctions announcement, North Korea on Friday pulled out of a liaison office with South Korea, a major setback for Seoul, which has pushed hard for engagement between Washington and Pyongyang.

NK has refused invitations for inter-Korean meetings and today’s action is another indication of its not wanting to deal with Seoul. Since the Hanoi summit, Pyongyang has been dismissive of South Korea… (3/)

The joint liaison office was set up in September in the border city of Kaesong after a historic summit between Kim Jong Un and South Korea’s President Moon Jae-in early last year.

Harry Kazianis of the conservative Center for the National Interest think tank said Trump’s move could be an effort to defuse tensions that seemed to be building between Washington and Pyongyang and the risk of North Korea pulling out of talks.

“Trump’s canceling out of sanctions might have been a bid to get North Korea to change its thinking,” he said.

U.S. Secretary of State Mike Pompeo said on March 4 he was hopeful he could send a team to North Korea “in the next couple of weeks, but there has been no sign of a North Korean willingness to extend such an invitation.

At this point, both NK and the US are taking care to not burn diplomatic bridges, but each side is slowly increasing pressure tactics. The status quo will hold for a while, but remains susceptible to miscalculation. (7/7)

Klingner said Trump’s move signaled that his “maximum pressure” sanctions campaign on North Korea was not going to get any stronger and recalled an announcement the president made before a first summit with Kim in June last year when he said he was putting a large list of planned sanctions on hold.

U.S. officials held a briefing shortly after the sanctions were unveiled, citing the measures as proof that Washington intended to keep up pressure on Pyongyang and national security adviser Bolton tweeted on Thursday:

“Important actions today from @USTreasury. The maritime industry must do more to stop North Korea’s illicit shipping practices. Everyone should take notice and review their own activities to ensure they are not involved in North Korea’s sanctions evasion.”

Bolton said early this month that the United States would look at ramping up sanctions on North Korea if Pyongyang did not scrap its nuclear weapons program.

A senior White House official who briefed reporters on the latest sanctions on Thursday said the announcement was meant to maintain sanctions enforcement rather than intensify the pressure.

While declining to say whether Washington was trying to send a post-summit message to Pyongyang with the sanctions, the official said Trump had “made clear that the door is wide open to continuing the dialogue with North Korea.”