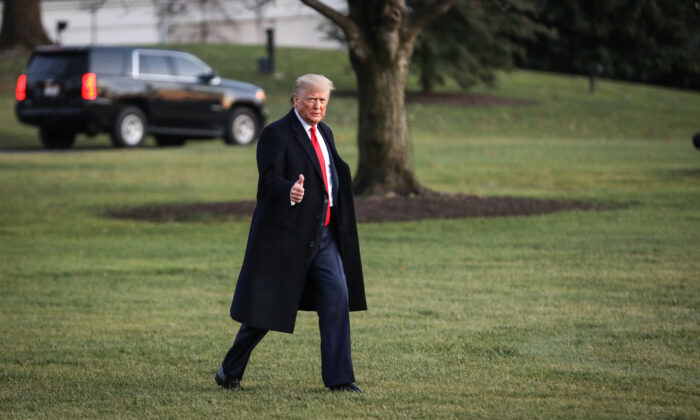 President Donald Trump walks on the South Lawn to board Marine One at the White House in Washington on Dec. 18, 2019. (Charlotte Cuthbertson/The Epoch Times)
Trump Administration

Trump Retweets His 2014 Joke About Aliens and Government Spending

President Donald Trump on Dec. 23 retweeted his own joke from 2014 concerning aliens and the vast sums of money the United States doles out to foreign nations.

“I hope we never find life on other planets because there’s no doubt that the U.S. Government will start sending them money!” the June 4, 2014, message reads.

The president shared the missive a day after he surprised lawmakers in Washington with a threat to veto a pandemic relief and government spending bill unless lawmakers strip out several foreign aid items, including $10 million for gender programs in Pakistan.

“Congress found plenty of money for foreign countries, lobbyists, and special interests, while sending the bare minimum to the American people who need it. It wasn’t their fault, it was China’s fault, not their fault,” the president said in a video recorded in the White House’s Diplomatic Reception Room.

“I am asking Congress to amend this bill and increase the ridiculously low $600 to $2,000, or $4,000 for a couple,” he said. “I am also asking Congress to immediately get rid of the wasteful and unnecessary items from this legislation and to send me a suitable bill, or else the next administration will have to deliver a COVID relief package, and maybe that administration will be me, and we will get it done.”

Democratic leaders quickly accepted Trump’s offer to bump up the amount of the stimulus checks to $2,000 but did not address the president’s demand to strike foreign aid from the bill.

Foreign aid allocations are a common feature of Congressional spending bills but Trump has been adamant about reducing the spending. In his 2021 proposed budget issued back in February, the president called for a 21 percent reduction in foreign aid spending.

“It really is a disgrace. For example, among the more than 5,000 pages in this bill, which nobody in Congress has read because of its length and complexity, it’s called the COVID Relief Bill but it has almost nothing to do with COVID. This bill contains $85.5 million for assistance to Cambodia, $134 million to Burma, $1.3 billion for Egypt and the Egyptian military, which will go out and buy almost exclusively Russian military equipment,” the president said.

Trump also complained about the vast sums apportioned to institutions that appear unrelated to the nation’s fight against the Chinese Communist Party (CCP) virus, commonly known as the coronavirus. He ticked off a long list of items to make his point.

“$40 million for the Kennedy Center in Washington D.C., which is not even open for business, $1 billion for the Smithsonian, and an additional $154 million for the National Gallery of Art, Likewise, these facilities are essentially not open,” the president continued. “$7 million for reef fish management, $25 million to combat Asian carp, $2.5 million to count the number of amberjack fish in the Gulf of Mexico, a provision to promote the breeding of fish in Federal hatcheries. $3 million in poultry production technology, $2 million to research the impact of downed trees, $566 million for construction projects at the FBI.”