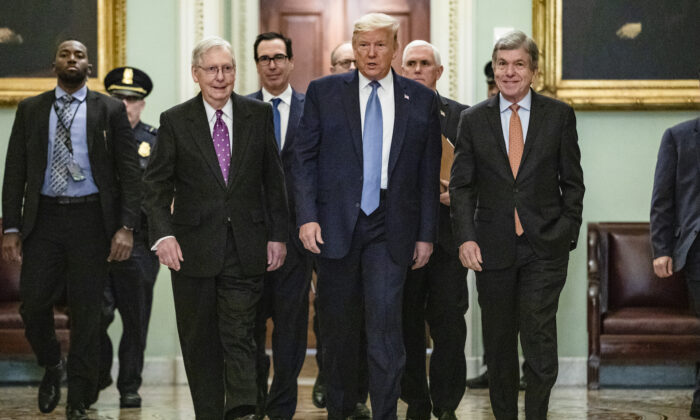 In a post on Truth Social, Trump said the Kentucky senator is a “broken down political hack” and challenged his loyalty to the Republican Party. “Why do Republicans Senators allow a broken down hack politician, Mitch McConnell, to openly disparage hard working Republican candidates for the United States Senate,” Trump asked on the platform.

He added: “This is such an affront to honor and to leadership. He should spend more time (and money!) helping them get elected, and less time helping his crazy wife and family get rich on China!” Trump was making reference to McConnell’s wife, Elaine Chao, having family ties to a shipping company that does extensive business in China, according to reports.

Trump’s critical comment came days after McConnell told reporters that the GOP likely won’t retake the Senate because, according to him, there are problems with certain Republican candidates running for office in this election cycle. He didn’t elaborate.

“I think there’s probably a greater likelihood the House flips than the Senate,” McConnell told reporters in Kentucky last week. “Senate races are just different, they’re statewide, candidate quality has a lot to do with the outcome.”

McConnell did not say whether he has a plan or will try to help certain Republican candidates win their races.

Republicans need a net gain of one Senate seat to retake control of the congressional body. The Senate now stands at 50–50, with Vice President Kamala Harris serving as a tie-breaker for the Democrats.

“In the Senate, if you look at where we have to compete in order to get into a majority, there are places that are competitive in the general election,” McConnell also said in April. “So, you can’t nominate somebody who’s just sort of unacceptable to a broader group of people and win. We had that experience in 2010 and 2012.”

Since he left the White House, Trump has often panned the leadership of McConnell, who in 2020 happily touted the former president’s endorsement to win his Senate race.

While McConnell has issued few statements in response to Trump’s criticisms of the senator’s leadership, he believes he will be reelected as GOP leader regardless of whether Republicans or Democrats take over in 2022.

“Well, look at it this way: I have been elected eight times without opposition. If I have an opponent—I don’t own this job, and there’s always an election every two years for leader—if anybody wants to challenge me, have at it,” McConnell told Fox News earlier this month. McConnell then said he is confident about being reelected as GOP leader.