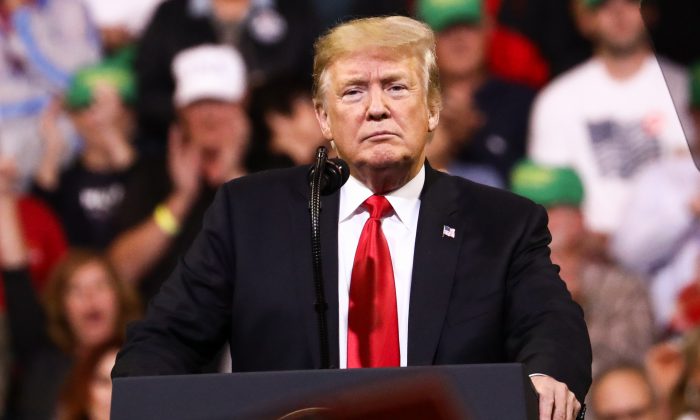 A number of prominent Republicans, including the sitting president, have reacted with antipathy and condemnation over former Attorney General Eric Holder’s apparent call for violence.

Holder, the latest in a growing list of prominent Democrats to use violent rhetoric against Republicans in recent months, urged fellow supporters to abandon former First Lady Michelle Obama’s previous calls for civility at a campaign event for local Georgia party Democrat candidates.

After boisterous applause Holder then solidified his stance.

“That’s what this new Democratic Party is about,” he added.

Minutes later, Holder further explained his statement, saying: “When I say we, you know, ‘We kick ’em,’ I don’t mean we do anything inappropriate. We don’t do anything illegal, but we got to be tough.”

Holder concluded with a call to action, saying they’re “proud as hell” to be Democrats and that they’re “willing to fight for the ideals of the Democratic Party.”

Michelle Obama had used the line “when they go low, we go high” during her speech at the 2016 Democratic National Convention. Holder is also believed to be a potential 2020 presidential candidate. He said he would make a final decision on running early next year.

A number of prominent Democrats’ similar remarks in recent months have preceded an increase in reports of violence, death threats, and harassment against both supporters of President Donald Trump and members of his administration.

Former Secretary of State Hillary Clinton, who lost the 2016 presidential election to Trump, also used the same rhetoric in an interview with CNN, days before Holder’s remarks.

“You cannot be civil with a political party that wants to destroy what you stand for, what you care about,” she said during the Oct. 9 segment.

In July, Sen. Cory Booker (D-N.J.), who is also considering running for office in 2020, urged people to “get up in the face of some congresspeople.”

In June, Rep. Maxine Waters (D-Calif.) told a crowd in Los Angeles, “If you see anybody from that Cabinet in a restaurant, in a department store, at a gasoline station, you get out and you create a crowd and you push back on them, and you tell them they’re not welcome anymore, anywhere.”

“As a survivor of a politically motivated attack, it is tragic to think this is an acceptable state of political discourse in our country. I refuse to stand for this and I will continue to call for an end to it,” he wrote.

Scalise was the victim of a politically motivated shooting at a Republican baseball practice session last year by Bernie Sanders supporter James T. Hodgkinson. Scalise was hospitalized with severe injuries to his hip, left leg, and lower organs.

Scalise pleaded with Democrats to condemn these dangerous actions, instead of promoting them. He said that for change to happen, leaders of the party must be the first to move.

“In America, we win battles at the ballot box, not through mob rule or intimidation. While it’s clear many Democrats refuse to accept the election of President Trump, if they want change, they need to convince people with their ideas and actually win elections, rather than call for violent resistance, harassment, and mob rule.”

He called Holder’s call for violence “a direct threat to our democracy.”

Holder’s remarks were further admonished by Trump, who described them as “dangerous” in an interview with Fox News.

“He better be careful what he’s wishing for,” Trump said over the phone during the segment. “That’s a disgusting statement for him to make.”

During his recent pre-midterm rallies, Trump has repeatedly called out the Democrats for their conduct throughout the hearings of Supreme Court Justice Brett Kavanaugh, describing it as a “shameful campaign of political and personal destruction.”

“The far-left mob is not letting up. Earlier today, former Secretary of State Clinton sent this signal as clear as day,” McConnell said on Oct. 10. “She told CNN exactly how she views millions of Americans who hold different political views from her own.”

Continuing the critiques, Sen. Rand Paul, (R-Ky.) told a radio show that he fears things could turn deadly if the discourse continues to escalate.

“I fear that there’s going to be an assassination,” Paul said Oct. 9. “I really worry that somebody is going to be killed and that those who are ratcheting up the conversation … they have to realize they bear some responsibility if this elevates to violence.”