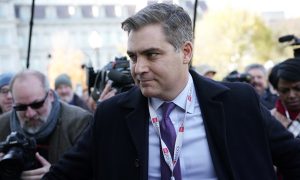 In a renewed push for border-wall funding, President Donald Trump headed to the Southern border in McAllen, Texas, to make his case again amid what he described as “a crisis of the heart and a crisis of the soul” in his national address just days ago.

Arriving at the Border Patrol’s McAllen Station on Jan. 10, Trump participated in a roundtable discussion on immigration and border security with Texas officials. Among those making the trip with the president were White House Chief of Staff Mick Mulvaney, senior adviser and son-in-law Jared Kushner, Sens. John Cornyn (R-Texas) and Ted Cruz (R-Texas), and other officials.

Props figured prominently at the event, including an AR-15 rifle, Colt handguns, a plastic bag full of cash, and black-taped bricks of heroin and methamphetamine. All are examples of items that Border Patrol agents have seized.

In his opening remarks, Trump praised Border Patrol officers, as Homeland Security Secretary Kirstjen Nielsen sat to his right and Reggie Singh to his left. Singh is the brother of slain California police Corporal Ronil Singh, who was shot and killed by an illegal immigrant the day after Christmas.

After his remarks, Trump invited Singh to speak about his brother’s life. He said his brother always wanted to be in law enforcement. He migrated to the U.S. from Fiji legally, asked for his citizenship and worked toward it, on the way to becoming a K-9 officer.

“The way he was killed, what my family is going through right now, I do not want any other family, or law enforcement person, to go through that,” he said, voice wavering and his eyes welling with tears. “At 33 years old, Ronil Singh was cremated and I had to pick up his remains. It breaks my heart.”

Trump embraced Reggie, telling him, “We are with you. You know that, right?”

Gustavo Perez Arriaga, 32, a Mexican national, was arrested and charged with Singh’s murder after a two-day manhunt.

Trump then asked Marie Vega to speak about her lost son, Javier Vega, who became a Marine and then a border patrol agent.

“It was supposed to be a peaceful, fun fishing afternoon, but it didn’t happen that way because we had a criminal illegal alien that killed him,” she said. “A parent should not have to bury a child. We need the wall.”

Trump said Democrats don’t understand what is truly happening along the border. On Jan. 9, he walked out of another round of failed talks with Democratic leaders, including House Speaker Rep. Nancy Pelosi (D-Calif.) and Senate Minority Leader Sen. Chuck Schumer (D-N.Y.).

Pelosi and Schumer have repeatedly argued that a border wall would be expensive and ineffective. Democrats haven’t offered any deal aside from their $1.3 billion offer for border-security purposes, which includes no funding for a wall.

Meanwhile, the partial government shutdown continued into its 20th day, with no resolution between the two camps in sight.

“Politicians in Washington—they’ve never been here,” Trump said. “They don’t know the first thing about what we’re talking about.”

In their roundtable remarks, Sens. Cornyn and Cruz criticized Democrats for saying there is no crisis.

“When people like Ted and I hear our colleagues in Washington say this is a manufactured crisis, we kind of wonder what planet they’ve been living on,” Cornyn said, as he pointed to the piles of seized drugs and the sizeable bag of cash amounting to $362,062.

Cruz said politicians who claim the border is secure are “ignoring reality.”

Trump reacted to the props in the room, describing them as “brutal.” A CBP port director showed one display that included 117 kilograms (258 pounds) of meth, and four kilograms, or almost 9 pounds, of heroin that were seized at a port of entry by K-9 units.

A Border Patrol agent in charge exhibited photos on poster boards of suspects smuggled in the trunk of a car; marijuana and firearms stashed inside a house; a vehicle that failed to yield to border agents; and a juvenile who died in the vehicle, among others.

Trump later traveled to the banks of the Rio Grande, where he was greeted by border agents in Mission, Texas, the site where another section of the wall has been proposed.