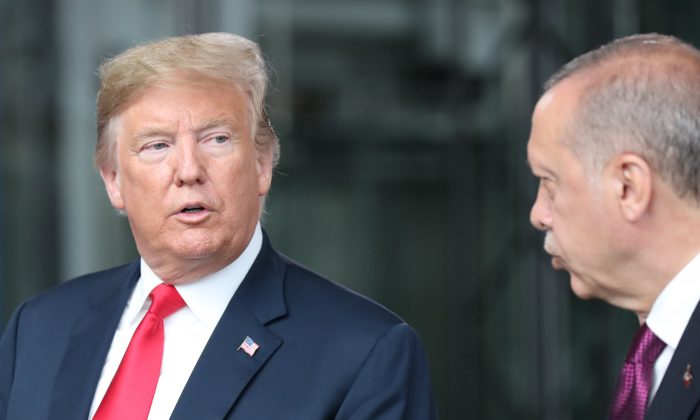 Trump Renews Call for Release of American Pastor in Turkey

President Donald Trump called on Turkish President Recep Tayyip Erdogan to release an American pastor who has been behind bars for two years.

“A total disgrace that Turkey will not release a respected U.S. Pastor, Andrew Brunson, from prison. He has been held hostage far too long,” Trump wrote on Twitter, July 18. “Erdoğan should do something to free this wonderful Christian husband & father.”

A total disgrace that Turkey will not release a respected U.S. Pastor, Andrew Brunson, from prison. He has been held hostage far too long. @RT_Erdogan should do something to free this wonderful Christian husband & father. He has done nothing wrong, and his family needs him!

Trump’s calls for action marks the second time he has urged Turkey to release Brunson. Just months ago, not long after the pastor’s first court appearance, Trump wrote on Twitter he was being persecuted “for no reason.”

“Pastor Andrew Brunson, a fine gentleman and Christian leader in the United States, is on trial and being persecuted…” Trump wrote in April. They call him a Spy, but I am more a Spy than he is. Hopefully he will be allowed to come home to his beautiful family where he belongs!”

Brunson, a Christian pastor from North Carolina, has lived in Turkey for more than two decades and has been in pre-trial detention since 2016. He was accused by Turkey of orchestrating a failed military coup in 2016 and of having links to terrorist organizations, neither of which have been substantiated.

On July 18, the Turkish court ruled that Brunson will be kept in jail, pending trial.

The pastor denied all charges against him in his court appearance at a Turkish court in May.

“My service that I have spent my life on, has now turned upside down. I was never ashamed to be a server of Jesus but these claims are shameful and disgusting,” Brunson told the court in the Aegean town of Aliaga, north of Izmir.