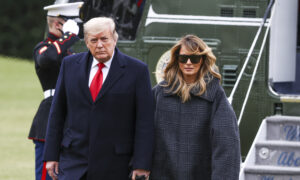 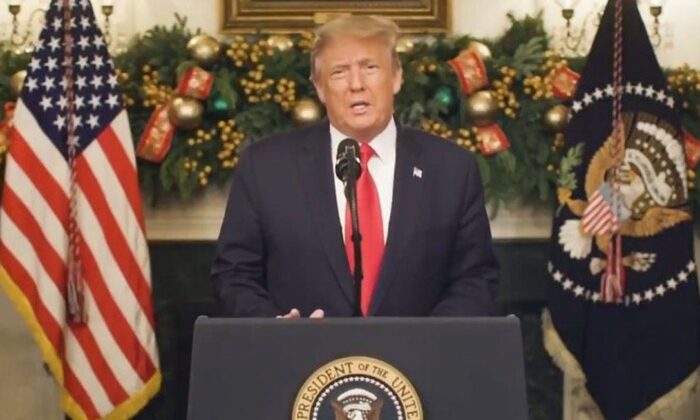 President Donald Trump on Thursday, after his return to Washington, released a statement on the progress of "Operation Warp Speed." (White House video / Twitter)
Trump Administration

President Donald Trump on Thursday, after his return to Washington, released a statement on the progress of “Operation Warp Speed.”

In a video posted on Twitter on New Year’s Eve, Trump made note of the accomplishments of his administration. He didn’t mention election fraud or his challenge to the outcome of the presidential race.

The president touted the development of the CCP virus vaccine under “Operation Warp Speed,” Middle East peace efforts, building up the U.S. economy before and after the pandemic, and more.

Trump started the video by saying: “In the face of great challenges this year, Americans showed incredible grit, strength, tenacity, and resolve.”

And at the end of the clip, he added, “In this season of joy, Americans have so much to be grateful for. We’re all blessed to live in the greatest country ever to exist on the face of the Earth. And we have made it greater than ever before.”

“We will end the pandemic once and for all,” Trump said of his administration’s efforts in developing treatment and a vaccine, noting the place of origin of the coronavirus. “The best is yet to come,” he added.

A  day before that, the president said that the federal government has sent out CCP virus vaccines to states, calling on them to “get moving.”

Trump was initially scheduled to attend a New Year’s party at his Mar-a-Lago resort in South Florida, but instead returned to the nation’s capital city, according to pool reports.

It comes as Sen. Josh Hawley (R-Mo.) on Wednesday said he would challenge the Electoral College votes during the Joint Session of Congress on Jan. 6, which could possibly trigger a debate in the Senate and House. The move requires at least one representative and senator to carry out, and numerous GOP House lawmakers have said they would initiate the challenge; it’s unclear if any other GOP senators will join Hawley.

During the Joint Session, a group of pro-Trump supporters is slated to gather in Washington. Trump on Twitter has encouraged people to attend.

JANUARY SIXTH, SEE YOU IN DC!

“The United States had more votes than it had people voting, by a lot. This travesty cannot be allowed to stand. It was a Rigged Election, one not even fit for third world countries,” Trump later wrote.