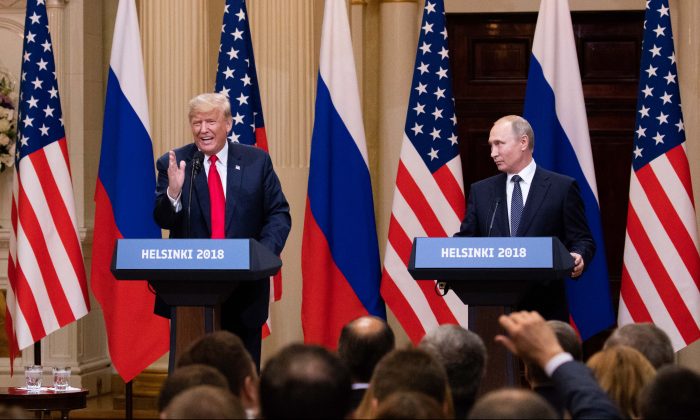 At the July 16 summit in Helsinki, Putin offered to submit a request for Russian law enforcement to interrogate the 12 officers, who were charged days before the meeting. The Russian leader further offered to allow members of special counsel Robert Mueller’s team travel to Russia and observe the interrogation, under the condition that the United States reciprocate the concession.

“It is a proposal that was made in sincerity by President Putin, but President Trump disagrees with it,” White House press secretary Sarah Sanders said in a statement on July 19. “Hopefully, President Putin will have the 12 identified Russians come to the United States to prove their innocence or guilt.”

Mueller filed the indictment against the Russian officers on July 13 at the U.S. Court for the District of Columbia. The indictment charges that the Russians hacked into Democratic computer systems, stole emails and files, and disseminated the loot with the intention of interfering in the 2016 election.

The United States does not have a standing extradition treaty with Russia. Complicating matters further, since 2014, members of Russia’s active military, intelligence, and law enforcement are prohibited by an internal directorate from traveling outside Russia, except to a few countries including China and Vietnam. All 12 of the Russian nationals named in the indictment are members of the Russian military intelligence agency formerly known as the GRU. In addition, the Russian constitution shields its citizens from extradition and deportation.

As a result, extradition of nationals from Russia is extremely difficult and rare. The United States has succeeded in extraditing several Russian nationals for computer crimes in recent years, but in all cases, they were not in Russia at the time of the extradition.

During the summit, Putin referenced a treaty between the United States and Russia that allows for cooperation between the two nations on criminal investigations. Signed in 1999 by President Bill Clinton and approved by the Senate in 2001, the treaty establishes a process for law enforcement agencies to carry out criminal investigations at the request of their counterparts.

Trump’s rejection of the offer comes after a nearly four-day media onslaught following the summit. Major news outlets with a track record of anti-Trump coverage seized on his remarks at the summit to paint a picture of American surrender. Despite measured statements by both leaders and signals of a warming relationship, commentators compared the summit to Pearl Harbor and 9/11.

“The Summit with Russia was a great success, except with the real enemy of the people, the Fake News Media,” Trump wrote on Twitter on July 19.

The Summit with Russia was a great success, except with the real enemy of the people, the Fake News Media. I look forward to our second meeting so that we can start implementing some of the many things discussed, including stopping terrorism, security for Israel, nuclear……..

….proliferation, cyber attacks, trade, Ukraine, Middle East peace, North Korea and more. There are many answers, some easy and some hard, to these problems…but they can ALL be solved!

“I look forward to our second meeting so that we can start implementing some of the many things discussed, including stopping terrorism, security for Israel, nuclear proliferation, cyber attacks, trade, Ukraine, Middle East peace, North Korea and more,” he wrote. “There are many answers, some easy and some hard, to these problems … but they can ALL be solved!”

At the summit, Putin said that Russia didn’t meddle in the 2016 election. Standing alongside Putin, Trump told reporters that he has confidence in American intelligence agencies and that Putin offered him a “powerful” denial when they met in private.

After the summit, and with the media in overdrive about his comments, Trump corrected a single word from his statement in Helsinki and again affirmed his support of the U.S. intelligence agencies.

“It should have been obvious. I thought it would be obvious, but I would like to clarify, just in case it wasn’t. In a key sentence in my remarks, I said the word ‘would’ instead of ‘wouldn’t,'” Trump said on July 18. “The sentence should have been, ‘I don’t see any reason why it wouldn’t be Russia.'”

Trump’s request for the Russian officers to stand trial mimics Putin’s own take on how the meddling allegations can be resolved. When discussing the allegations at the summit, Putin told a reporter that only a court of law could have the final say on the issue.

“Do you believe the United States is a democracy?” Putin said. “And if so, if it is a democratic state, then the final conclusion in this kind of dispute can only be delivered by a trial by the court, not by the executive—by the law enforcement.”

In announcing the charges against the Russian officers, Deputy Attorney General Rod Rosenstein said that the indictment contains no allegation of a crime by an American citizen. Rosenstein noted that Trump was briefed on the charges ahead of the announcement.