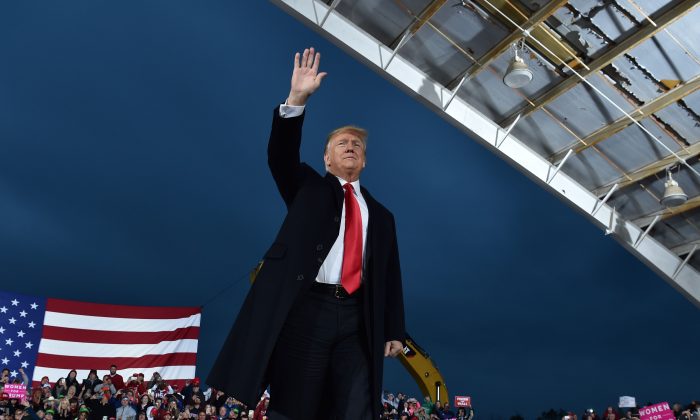 Trump accused media—specifically NBC News, who later issued a correction—of twisting and cutting his full remarks made during an Oct. 12 rally where he praised a number of Ohioans. He said his statements about Lee were part of a monologue in which he applauded Union Gen. Ulysses S. Grant—an Ohio native.

“NBC News has totally and purposely changed the point and meaning of my story about General Robert E. Lee and General Ulysses Grant,” he wrote in a tweet on Oct. 14. “Was actually a shoutout to warrior Grant and the great state in which he was born. As usual, dishonest reporting. Even mainstream media embarrassed!”

Near the end of his speech, Trump had referenced the Confederate Army general and his Union counterpart, before commending Grant for winning the civil war. Lee is not from Ohio.

“Lincoln had almost developed a phobia because he was having a hard time with a true great fighter and a great general, Robert E. Lee,” Trump said just moments later. “But Grant figured it out, and Grant is a great general, and Grant came from right here.”

Trump’s critique was most likely referring to an NBC News video post that left out his full remarks. The tweet, published on their official news Twitter account, said, “WATCH: President Trump says ‘Robert E. Lee was a great general’ during Ohio rally, calling the Confederate leader ‘incredible.'” It has been retweeted thousands of times.

News reports from other media had similar one-sided headlines in which they included Trump’s initial quote about Lee and left out the end of his anecdote.

NBC later issued a correction for their post the same day Trump criticized them. They said that the “attached video clip lacked the full context for Trump’s remark.” The president acknowledged the correction in an Oct. 14 tweet.

During the rally, Trump said that despite Grant’s drinking problem, Lincoln still turned to the Union general to defeat Lee.

“And he went in and knocked the hell out of everyone,” Trump said of Grant. “They said to Lincoln, ‘You can’t use him anymore, he’s an alcoholic’ and Lincoln said, ‘I don’t care if he’s an alcoholic, frankly, get me six or seven just like him.’

“He started to win. Grant really did—he had a serious problem, a serious drinking problem, but man, was he a good general,” Trump told the crowd. “And he’s finally being recognized as a great general.”

Trump in the past criticized the recent push to tear down Confederate statues, including those of Lee.

An Aug. 16 poll by NPR, PBS, NewsHour, and Marist on Aug. 16 found that 62 percent of Americans believe that “statues honoring leaders of the Confederacy” should “remain as a historical symbol.” Only 27 percent of respondents believed the statues should be removed.

“Sad to see the history and culture of our great country being ripped apart with the removal of our beautiful statues and monuments,” Trump said in August. “You can’t change history, but you can learn from it. Robert E Lee, Stonewall Jackson–who’s next, Washington, Jefferson? So foolish!”