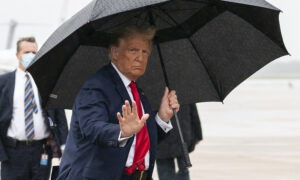 Biden and Trump took part in competing town halls on Thursday night after the commission in charge of debate planning canceled a planned debate.

Trump told the audience that they should vote for him because of the job he’s done in his first term.

“We have the strongest economy in the world. We closed it up. We are coming around the corner. The vaccines are coming out soon, and our economy is strong. We are at a level with jobs like we’ve never been before. We’ve rebuilt our military. We’ve rebuilt our borders. We had no borders. We had no nothing. We’ve rebuilt so much. We’ve given you the greatest tax cut in the history of our country. Greatest regulation cut, equally as important. And we created new levels of jobs that nobody thought was possible. And next year is going to be better than ever before,” he said.

Biden, meanwhile, promised to unite what he described as a divided country.

“I’ve never been more optimistic about the prospect for this country than I am today. And I really mean that. I think the people are ready. They understand what’s at stake, and it’s not about Democrat or Republican. If I get elected, I’m running as a proud Democrat, but I’m going to be an American president,” he said.

“I’m going to take care of those who voted against me, as well as those who voted for me, for real. That’s a presence too. We got to heal this nation, because we have the greatest opportunity to any country in the world to own the 21st century. And we can’t do it divided.”