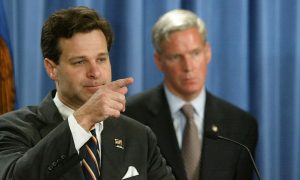 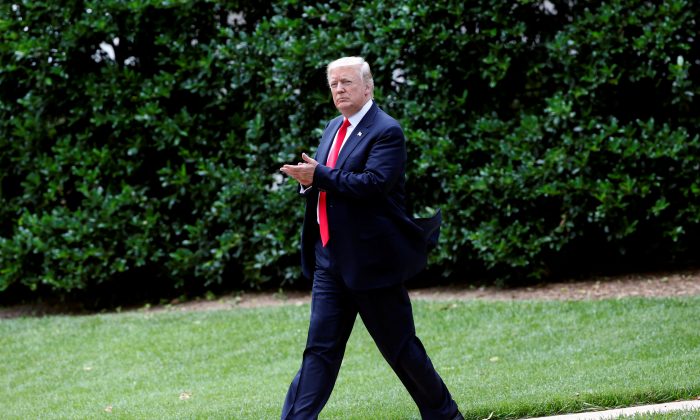 President Donald Trump walks to Marine One as he departs for a day trip to Ohio from the South Lawn of the White House in Washington on June 7, 2017. (REUTERS/Joshua Roberts)
US

CINCINNATI, Ohio—President Donald Trump on Wednesday pushed plans for $1 trillion in infrastructure spending as he struggles to gain momentum for his economic agenda.

“America wants to build,” Trump said. “There is no limit to what we can achieve. All it takes is a bold and daring vision and the will to make it happen.”

Speaking in Cincinnati, Ohio, Trump reviewed a proposal announced earlier this year to leverage $200 billion in his budget proposal into a $1 trillion of projects to privatize the air traffic control system, strengthen rural infrastructure and repair bridges, roads and waterways.

Trump said he would not allow the United States to become a “museum of former glory.” He spoke about backing large transformative projects but did not give specifics.

“We will construct incredible new monuments to American grit that inspire wonder for generations and generations,” he said.

Trump pointed to a government program that allows the private sector to tap into low-cost government loans called the Transportation Infrastructure Finance and Innovation Act as a way to leverage federal funds with state, local, and private sector funding.

Transportation Secretary Elaine Chao said at a Senate hearing on Wednesday that administration plans to unveil a detailed legislative proposal by the end of September.

Democrats want $1 trillion in new federal spending and proposed a plan that includes $200 billion in roads and bridges,$20 billion in expanding broadband Internet access, $110 billion for water systems and $75 billion for schools.

The Ohio visit was the second leg of a week-long White House focus on infrastructure. On Monday the president proposed spinning off air traffic control from the Federal Aviation Administration.

The proposal to privatize air traffic control has run into skepticism and opposition from Democratic senators and some Republicans.

The infrastructure push comes as the White House seeks to refocus attention on core promises to boost jobs and the economy that Trump made last year during his presidential campaign.