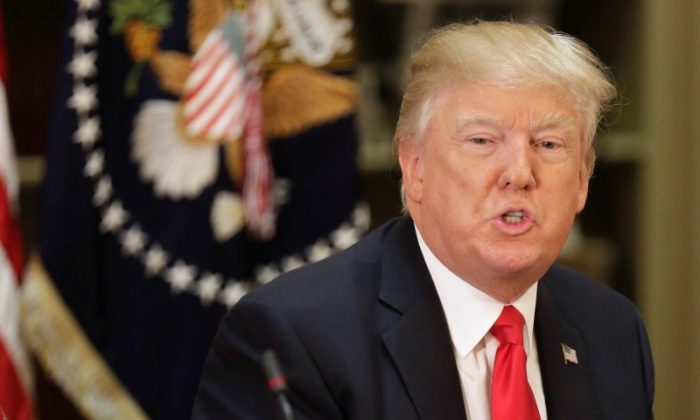 President Donald Trump during a strategic and policy CEO discussion in the Eisenhower Execution Office Building in Washington on April 11, 2017. (REUTERS/Joshua Roberts)
Politics

WASHINGTON—President Donald Trump weighed in on congressional efforts to avoid a government shutdown, telling Democrats on Sunday that Obamacare will die without a cash infusion the White House has offered in exchange for their agreement to fund his border wall.

“Obamacare is in serious trouble. The Dems need big money to keep it going—otherwise it dies far sooner than anyone would have thought,” Trump said in a Twitter posting.

ObamaCare is in serious trouble. The Dems need big money to keep it going – otherwise it dies far sooner than anyone would have thought.

In a second tweet, he added: “The Democrats don’t want money from budget going to border wall despite the fact that it will stop drugs and very bad MS 13 gang members.”

The Democrats don’t want money from budget going to border wall despite the fact that it will stop drugs and very bad MS 13 gang members.

MS-13 is a criminal gang with members of Central American origin.

But Trump’s online salvo was met by Democratic calls for him to stop making “poison pill” demands.

“The only fly in the ointment is that the president is being a little heavy handed, and mixing in and asking for things such as the wall,” Senate Democratic leader Charles Schumer said.

“We’d ask him to let us do our work, not throw in some last-minute poison pills that could undo it, and we could get this done,” Schumer told reporters.

Trump wants the money included in spending legislation that Congress must pass by Friday to keep the federal government operating through Sept. 30, when the 2017 fiscal year expires.

Mulvaney and White House Chief of Staff Reince Priebus played down the danger of a shutdown. Mulvaney said talks between Republicans and Democrats could produce an agreement as early as Sunday.

If talks fail, the government would shut down on Saturday, Trump’s 100th day in office.

“I’m pretty confident we’re going to get something that’s satisfactory to the president in regard to border security within the current negotiations,” Priebus said on NBC’s “Meet the Press.”

The White House is expected to address another Trump campaign promise this week with a Wednesday announcement on tax reform that Mulvaney said would offer “governing principles, some guidance, also some indication of what the rates will be.”

But he said basic elements of the plan remain undecided, including whether to have deficit-funded tax cuts that would not be permanent: “You can either have a small tax cut that’s permanent, or a large tax cut that is short term.”

In a tweet on Saturday, Trump promised a “Big TAX REFORM AND TAX REDUCTION will be announced next Wednesday.”

Big TAX REFORM AND TAX REDUCTION will be announced next Wednesday.

But legislative text on tax reform is not expected until June, Mulvaney said.

Meanwhile, spending legislation will require Democratic support to clear the Senate, and the White House says it has offered to include $7 billion in Obamacare subsidies to help low-income Americans pay for health insurance, if Democrats accept funding for the wall.

Democrats showed no sign of softening their opposition to wall funding on Sunday and sought to place responsibility for any shutdown squarely on Trump and Republicans who control the House of Representatives and the Senate.

“The Democrats do not support the wall,” House Democratic leader Nancy Pelosi told NBC’s “Meet the Press. “The wall is, in my view, immoral, expensive, unwise.”

Senator Richard Durbin, an Illinois Democrat, called on Trump to “back off.”

“To think that he would consider shutting down the government of the United States of America over this outlandish proposal of a border wall … that would be the height of irresponsibility,” he told CNN’s “State of the Union.”