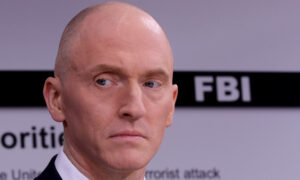 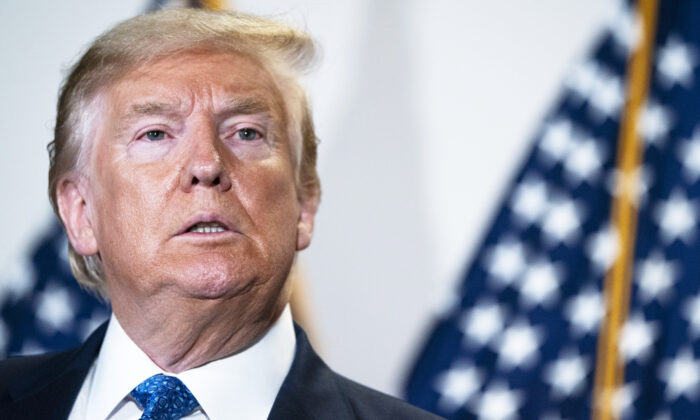 President Donald Trump speaks to the press after meeting with Republican Senators in the Hart Senate Office Building on Capitol Hill in Washington on May 19, 2020. (Drew Angerer/Getty Images)
Trump Administration

“Yes, the doctor did prescribe it for him. And he took it after having several discussions with Dr. Conley about its efficacy,” McEnany told David Brody of CBN News.

“And he believed, Dr. Conley, that the benefits outweigh the risks for the President. And, you know hydroxychloroquine, it’s worth mentioning, is a drug that has been approved for at least three other conditions. Malaria is one of them as a prophylaxis (preventative measure) … Lupus is another example.”

McEnany referenced the “right to try” act Trump signed into law May 30, 2018, which allows patients who have been diagnosed with life-threatening diseases or conditions who have tried all approved treatment options and who are unable to participate in a clinical trial, to access certain unapproved treatments.

“So you know, you do have a right to try it, in essence, to reflect on the language of the president’s previous legislation that gives people the right to try and the waning days of their life or when they’re facing a fatal illness,” she said of  hydroxychloroquine.

However, the press secretary stressed that Americans should not take the drug unless it has been prescribed by their doctor, adding, “it’s very important to say that.”

“Only your doctor can say that this is for you and prescribe it to you. But nevertheless, to completely act as if this is some sort of poison when there are many, many Americans and many people around the world taking this for Lupus and other illnesses—it just does more harm than good.”

McEnany’s comments came two days after the White House released a letter from White House physician Dr. Sean Conley to McEnany stating that the president was “in very good health” and was receiving regular testing for COVID-19, which have all been negative to date.

“After numerous discussions he and I had regarding the evidence for and against the use of hydroxychloroquine, we concluded the potential benefit from treatment outweighed the relative risk,” Conley wrote.

The letter did not explicitly state that the doctor had prescribed hydroxychloroquine, nor did it include information about Trump’s dosage.

Trump told reporters earlier Monday he had started taking the controversial drug, which he has regularly championed as a potential “game changer” in the fight against coronavirus despite limited evidence from the medical community.

Speaking at a roundtable event at the White House, Trump told reporters, “I happen to be taking it … I’m taking it, hydroxychloroquine. Right now, yeah. A couple of weeks ago, I started taking it cause I think it’s good. I’ve heard a lot of good stories.

Trump also said that he is taking zinc, and that he has taken an initial dose of the antibiotic azithromycin, or Z-Pak.

His disclosing his taking of the drug comes after the Food and Drug Administration (FDA) last month issued a warning that hydroxychloroquine should not be taken outside of a hospital or clinical trial after it became aware of reports of “serious heart rhythm problems” in patients with the virus who were treated with the malaria drug, often in combination with azithromycin.