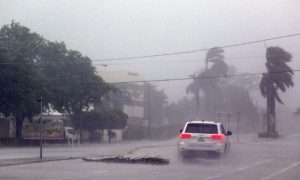 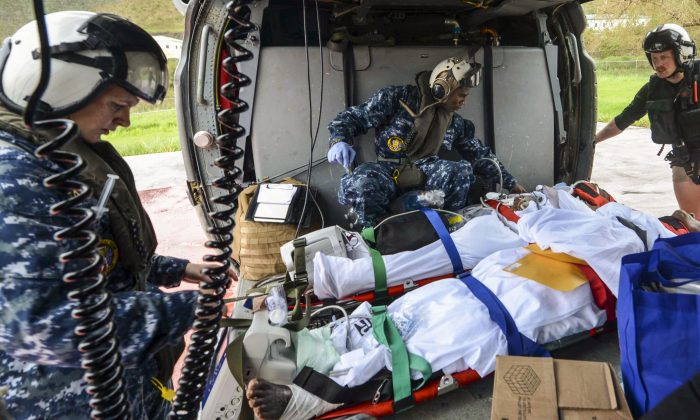 Sailors place evacuees in a Seahawk helicopter during first response efforts in the U.S. Virgin Islands on Sept. 7, in the aftermath of Hurricane Irma. (U.S. Department of Defense)
US

Trump Prepares 7,450 Troops to Respond to Hurricane Irma and Jose

Relief efforts are working on the ground, both ahead of and in the wake of current disasters, following the Texas floods from Hurricane Harvey, and now with Hurricanes Irma and Jose.

More than 7,450 Army personnel are currently involved in disaster preparation, relief efforts, or are on standby to prepare to assist. These include active duty troops, National Guardsmen, and civilians in the U.S. Army Corps of Engineers.

More than 140 aircraft, 650 vehicles, and 150 boats have also been sent to help; with another 720 vehicles on standby, according to the Department of Defense (DOD).

Troops are currently responding to the “significant” levels of destruction caused by Hurricane Irma throughout the U.S. Virgin Islands and other Caribbean islands, according to DOD. In Florida, they are preparing for search and rescue efforts, for relief efforts, and to provide medical support.

After President Donald Trump’s recent return from Texas, where he and First Lady Melania Trump visited victims of the floods from hurricane Harvey, he called a cabinet meeting at Camp David on Sept. 9 to track the disasters, measure their potential impacts, and prepare state and federal responses.

This is a storm of enormous destructive power, and I ask everyone in the storm’s path to heed ALL instructions from government officials. pic.twitter.com/nJfM2Sdme1

After opening prayers from Vice President Mike Pence, Trump addressed the cabinet, saying that while Irma is a serious threat, ‘We’re as prepared as you can be for such an event.”

“All of America grieves for those who have already lost their lives,” he said, adding that the United States will continue its recovery efforts in Texas and Louisiana, and said he “already approved emergency declarations in Florida, Georgia, South Carolina, Puerto Rico, and the U.S. Virgin Islands, which was really hit badly. I looked at the damage this morning.”

“Property is replaceable, but lives are not. And safety has to come first,” Trump said, adding that his administration is monitoring the crisis around the clock, and is in constant communication with governors and other officials.

Trump has been giving regular updates on the hurricanes on Twitter, and through official channels. He stated on Sept. 9, “The U.S. Coast Guard, FEMA and all Federal and State brave people are ready. Here comes Irma. God bless everyone!”

The U.S. Coast Guard, FEMA and all Federal and State brave people are ready. Here comes Irma. God bless everyone!

Obama was criticized for taking a vacation and golfing on Martha’s Vineyard while Americans in Louisiana 1,600 miles away faced the worst U.S. natural disaster since Hurricane Sandy.

However, Bush’s response in 2005 was significantly stronger than Obama’s in 2016. As the Independent Journal Review reported, at the time, Bush spoke to the nation prior to the storm, and preemptively declared a federal state of emergency in Louisiana, freeing funds and assets to assist with preparations.

While the Obama administration did declare an emergency in Louisiana, Obama did not release a public statement. According to the Independent Journal Review, Obama had also attended a $10,000-per-couple, closed-door fundraiser for Hillary Clinton, and while he took the opportunity to criticize Trump, he again made no mention of Louisiana.

Fox News noted at the time that the same news outlets that had criticized Bush’s response to Katrina had ignored Obama’s “apparent lack of response.”

Also, while the recent floods in Texas produced images of Americans coming together, and of people of all races helping one-another, Obama was also criticized in 2016 for releasing a divisive 16-page memo telling people responding to the crisis to avoid “unlawful discrimination on the basis of race, color, or national origin.”

Obama’s comments were seen as creating an unrealistic racial rift in the crisis. American Conservative’s Rod Dreher commented at the time that “everywhere you look you can find black folks and white folks loving on each other, helping each other through this crisis.” Many observers have noted the same brotherhood shown in responding to the Texas floods.

Amid the controversy in 2016, Trump and Vice President Mike Pence visited the flood victims in Louisiana while on the campaign trail. According to Politico at the time, while Trump was visiting volunteers at a church in Greenwell Springs, Louisiana, he commented on Obama’s lack of response, saying “The president says he doesn’t want to come, he is trying to get out of a golf game.”

Following the comment, Obama announced he would visit the victims, and declared that his delay was to ensure his presence wouldn’t interfere with first responders.